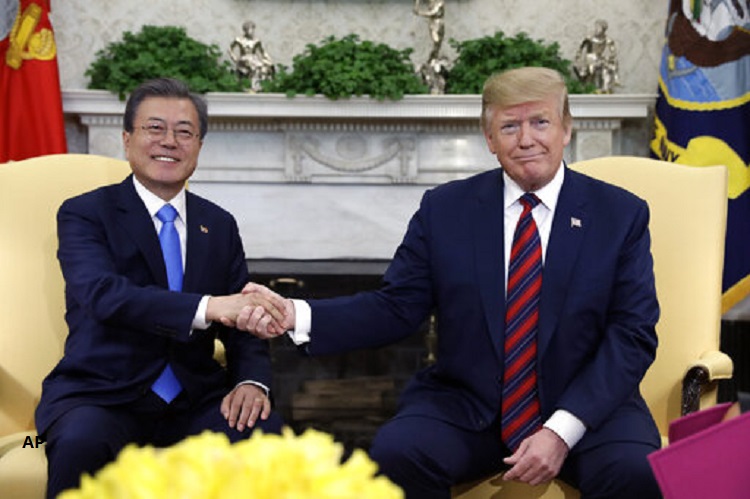 We are discussing many, many important things, including, obviously, North Korea, the relationships with North Korea.  I had, in many respects, a very good meeting.  We did not fulfill what we wanted to, but in many ways, we — certain things were agreed to.

My relationship is very good with, as you know, Chairman Kim.  And I think that it will go on that way.  We’ll see.  We’ll probably know.  But we’ll be discussing that.  We’ll be discussing trade, military, military purchases.  South Korea buys a great deal of equipment from us, especially military equipment.

I just do want to tell you that great progress has been made and a great relationship has been made in North Korea too.  Kim Jong Un has been, really, somebody that I’ve gotten to know very well and respect, and hopefully — and I really believe that, over a period of time, a lot of tremendous things will happen.

I think North Korea has a tremendous potential, and I believe that President Moon agrees with that.  And we will be discussing that and even potential meetings, further meetings, with North Korea and Kim Jong Un.

PRESIDENT TRUMP:  Well, we are discussing certain humanitarian things right now, and I’m okay with that, to be honest.  I think you have to be okay with that.  And South Korea is doing certain things to help out with food and various other things for North Korea.  And we’ll be discussing different things inside.

So we’ll be discussing that very much, actually.

Q    Mr. President, do you have the third summit with North Korea’s Chairman in mind?  And does that also include —

I enjoy the summits.  I enjoy being with the Chairman.  I think it’s been very productive.  And it really is — it’s a step by step.  It’s not going to go fast.  I’ve been telling you that for a long time.  If it goes fast, it’s not going to be the proper deal.

Q    Is a three-way summit with the leaders of the two Koreas also (inaudible)?

PRESIDENT TRUMP:  Well, that could happen also.  I think that would be largely dependent on Chairman Kim, because President Moon will do what’s necessary.  I know President Moon has been fighting this battle for a long time.  He’s done an excellent job.  I consider him a great ally.

Q    (As interpreted.)  How much do you support my President’s push for economic concessions, which include the resumption of the joint inter-Korean industrial complex and perhaps even the (inaudible)?

When the right deal is made, and when the nuclear weapons are gone, I just think that North Korea has potential as great as anything I’ve ever seen in terms of potential.  They have an unbelievable location — surrounded by sea on two sides, and on the other side, Russia, China, and over here, South Korea.  You just can’t do better than that.  And they have magnificent land.  It has tremendous potential.

Q    Is your position still that sanctions should stay in place on North Korea until there is denuclearization?  Or are you willing to consider easing sanctions to keep the talks going?