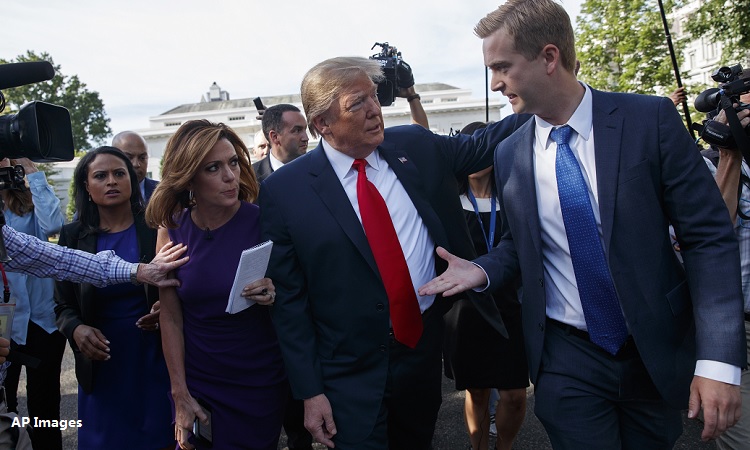 EXCERPTS OF REMARKS BY PRESIDENT TRUMP IN PRESS GAGGLE

Q    Mr. President, you have spoken so passionately about the circumstances that led to Otto Warmbier’s death.

Q    In the same breath, you’re defending now Kim Jong Un’s human rights records.  How can you do that?

Q    By the way, you declared the nuclear threat from North Korea is over.

I came in; that was what I inherited.  I should have never inherited.  That should have been solved long before I got there.  I did a great job this week.  The fake news said, “Oh, you met.”  But the only thing they saw that I gave up — one broadcast said, “He gave up so much.”  You know what I gave up?  I met.  I met.  We had great chemistry.  He gave us a lot.  You haven’t had a missile test in seven months.  You haven’t had a firing.  You haven’t had a nuclear test in eight and a half months.  You haven’t had missiles flying over Japan.  He gave us the remains of our great heroes.  I have had so many people begging me — parents, and fathers, mothers, daughters, sons — wherever I went, “Could you please get the remains of my boy back?”  They’re giving them back.  Nobody thought that was possible.

So the only thing I did was I met.  I got along with him great.  He is great.  We have a great chemistry together.  That’s a good thing, not a bad thing.

THE PRESIDENT:  I can’t speak to that.  I can only speak to the fact that we signed an incredible agreement.  It’s great.  And it’s going to be great for them, too.  Because now North Korea can develop and North Korea can become a great country economically.  It can become whatever they want.  But there won’t be nuclear weapons and they won’t be aimed at you and your families.

Q    Mr. President, why did you offer to halt the military exercises with South Korea?

THE PRESIDENT:  That was my offer.  Just so you understand.  Military —

THE PRESIDENT:  Okay, you want to hear?

THE PRESIDENT:  Okay?  Military — I call them “war games.”  I hated them from the day I came in.  I said, why aren’t we being reimbursed?

THE PRESIDENT:  That’s my term.

THE PRESIDENT:  They might use it.  We pay for it.  We pay millions and millions of dollars for planes, and all of this.  It’s my term.  I said, I’d like to halt it because it’s bad to be negotiating and doing it.  It costs us a lot of money.  I saved lot of money.  That’s a good thing for us.

And I will tell you this: We now have a very good relationship with North Korea.  When I came into this job, it looked like war — not because of me, but because — if you remember the sit-down with Barack Obama, I think you will admit this, he said the biggest problem that the United States has, and by far the most dangerous problem — and he said to me — that we’ve ever had, because of nuclear, is North Korea.

Now, that was shortly before I entered office.  I have solved that problem.  Now, we’re getting it memorialized and all, but that problem is largely solved, and part of the reason is we signed, number one, a very good document.  But you know what?  More importantly than the document — more importantly than the document, I have a good relationship with Kim Jong Un.  That’s a very important thing.

I can now call him.  I can now say, “Well, we have a problem.”  I told him — I gave him a very direct number.  He can now call me if he has any difficulty.  I can call him.  We have communication.  It’s a very good thing.

People are shocked that this is the kind of — you know, they thought Trump was going to get in and he was going to start throwing bombs all over the place.  It’s actually the opposite.

THE PRESIDENT:  We’re going to have a very strong verification process.

I spoke with China.  They are very happy.  Actually, they were much happier.  Now, they may not be as happy today because of what I’m doing with trade.  You probably heard that.  I assume it’s been announced by now.  But we’re putting tariffs on 50 billion dollars’ worth of technology and other things because we have to, because we’ve been treated very unfairly.

THE PRESIDENT:  Well, we’re working it as fast as possible.

Q    Is he coming to the White House soon?

Q    — before you put sanctions back on?

THE PRESIDENT:  We’re working it as fast as possible.

Q    Is he visiting the White House, Mr. Trump?