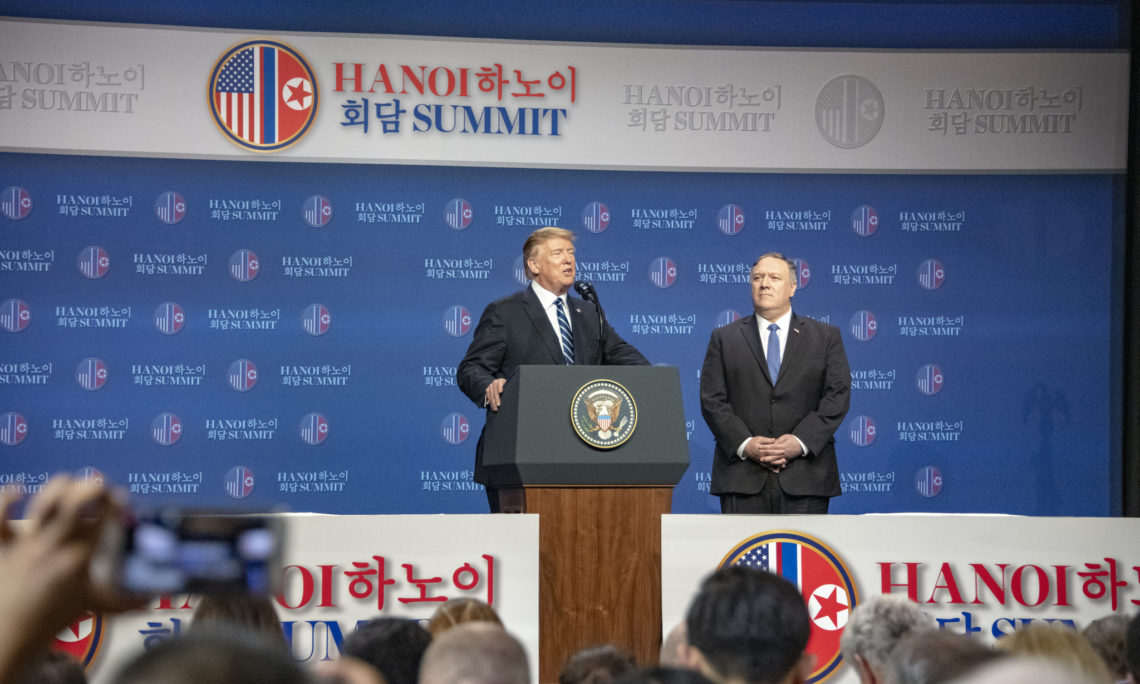 The White House
Office of the Press Secretary
February 28, 2019

EXCERPTS OF REMARKS BY PRESIDENT TRUMP IN PRESS CONFERENCE

We have, I think, reasonably attractive news from Pakistan and India.  They’ve been going at it, and we’ve been involved in trying to have them stop.  And we have some reasonably decent news.  I think, hopefully, that’s going to be coming to an end.  It’s been going on for a long time — decades and decades.  There’s a lot of dislike, unfortunately.  So we’ve been in the middle, trying to help them both out and see if we can get some organization and some peace.  And I think, probably, that’s going to be happening.

We have — Venezuela, as you know, has been very much in the news, and we’re sending supplies.  Supplies are getting through a little bit more.  It’s not easy.  It’s hard to believe somebody would say “let’s not do it.”  What difference would that make, except it’s great for its people to let it get through.  But we’re sending a lot of supplies down to Venezuela.  People are starving to death, and you would really think that the man in charge, currently, would let those supplies get through.  We are getting them into some of the cities and some of the areas that need them the most.  And it’s not an easy job.  It’s very difficult, actually.

On North Korea, we just left Chairman Kim.  We had a really, I think, a very productive time.  We thought, and I thought, and Secretary Pompeo felt that it wasn’t a good thing to be signing anything.  I’m going to let Mike speak about it.

But we literally just left.  We spent pretty much all day with Kim Jong Un, who is — he’s quite a guy and quite a character.  And I think our relationship is very strong.  But at this time — we had some options, and at this time we decided not to do any of the options.  And we’ll see where that goes.

But it was a very interesting two days.  And I think, actually, it was a very productive two days.  But sometimes you have to walk, and this was just one of those times.  And I’ll let Mike speak to that for a couple of minutes, please.

SECRETARY POMPEO:  Thank you, Mr. President.  We had been working, our teams — the team that I brought to bear, as well as the North Koreans — for weeks to try and develop a path forward so at the summit we could make a big step — a big step along the way towards what the two leaders had agreed to back in Singapore, in June of last year.

We made real progress.  And indeed we made even more progress when the two leaders met over the last 24, 36 hours.  Unfortunately, we didn’t get all the way.  We didn’t get to something that ultimately made sense for the United States of America.  I think Chairman Kim was hopeful that we would.  We asked him to do more.  He was unprepared to do that.  But I’m still optimistic.  I’m hopeful that the teams will get back together in the days and weeks ahead, and continue to work out what’s a very complex problem.

We have said, since the beginning, that this would take time.  Our teams have gotten to know each other better.  We know what the limits are.  We know where some of the challenges are.

And I think as we continue to work on this in the days and weeks ahead, we can make progress so that we can ultimately achieve what it is that the world wants, which is to denuclearize North Korea, to reduce risk for the American people and the people all around the world.

I wish we could have gotten a little bit further, but I’m very optimistic that the progress that we made — both in the run-up to this summit, as well as the progress that the two leaders made over these past two days — put us in position to get a really good outcome.

And the President and Chairman Kim both felt good that they had made that progress but couldn’t quite get along the line any further to make a deal that would have been bigger at this point.  I hope we’ll do so in the weeks ahead.

THE PRESIDENT:  We discussed many ways.  And the denuclearization is a very important — it’s a very important word.  Become a very well used word.  And a lot of people don’t know what it means, but to me it’s pretty obvious: We have to get rid of the nukes.

I think he’s got a chance to have one of the most successful countries — rapidly, too — on Earth.  Incredible country, incredible location.  You’re right between — if you think of it, you have, on one side, Russia and China, and on the other you have South Korea, and you’re surrounded by water and among the most beautiful shorelines in the world.

There is tremendous potential in North Korea, and I think he’s going to lead it to a very important thing, economically.  I think it’s going to be an absolute economic power.

Q    I just wanted to clarify, when you talk about what you would willing to give up all of the sanctions for, are you still thinking that you want North Korea to give up everything to do complete, verifiable denuclearization —

THE PRESIDENT:  Well, I don’t want to say that to you —

THE PRESIDENT:  Yeah.  Yeah.  It’s a good question.  I don’t want to say that to you because I don’t want to put myself in that position, from the standpoint of negotiation.  But, you know, we want a lot to be given up.  And we’re giving up.

And we’ll have to — you know, we’ll be helping them along economically, us and other — many other countries are going to be helping.  They’re going to be in there.  They’re prepared to help.  I can tell you: Japan, South Korea, I think China.  So many.

And speaking of China, we’re very well on our way to doing something special, but we’ll see.  I mean, I am always prepared to walk.  I’m never afraid to walk from a deal.  And I would do that with China, too, if it didn’t work out.

Q    Jessica Stone from CGTN.  I have a question about China, as you were talking about.  You talk about China being willing, potentially, to help economically.  And the fact that you’ve talked — or will talk to Presidents Moon and Prime Minister Abe, how would you describe China’s role in facilitating the engagement that’s happened, so far, between Pyongyang and Washington?

THE PRESIDENT:  I think China has been a big help.  Bigger than most people know.  On the border, as you know, 93 percent of the goods coming into North Korea come through China.  So there’s a great power there.  At the same time, I believe — I happen to believe that North Korea is calling its own shots.  They’re not taking orders from anybody.  He’s a very strong guy.  And they’re able to do things that are pretty amazing.  But 93 percent still come in from China.  China has an influence, and China has been a big help.

And Russia has been a big help too.  As you know, there’s a pretty small part of the border, but nevertheless significant — about 28 miles.  And things can happen there too.  And they’ve been a help.

Q    Thanks, President.  Jen Chen with Shenzhen Media Group of China.  In your meeting with Chairman Kim this morning and yesterday, did the topic of China come up?  If so, what can you share with us today?  And you probably will have the (inaudible) of Mar-a-Lago summit in March with Chinese President Xi Jinping.  What would you like accomplished with your agenda regarding China at that time?  Thank you.

THE PRESIDENT:  We did talk about China today a lot.  And he’s getting along with China and so are we.  And we are — you know, we’re — we’re, right now, you look at what’s happened to our country; we’ve picked up trillions and trillions of dollars of net worth.  Our stock market is almost at its all-time high.  Our economy is incredible.  Our unemployment numbers are among the best we’ve ever had in our history.

And with China, they’re having some difficulty, as you know.  But I think that a lot of the difficulty is because of the tariffs that they’re having.  And in addition to that, we’re putting a tremendous amount of money; you saw trade deficits went down last month.  Everybody was trying to find out why.  Well, we’re taking in a lot of tariff money, and it’s going right to the bottom line and it has reduced the trade deficits.

So we’ll see what happens with China.  I think we have a very good chance.  Their numbers are down.  But I don’t want that.  I want their numbers — I want them to do great.  But we’ve been losing anywhere from $300- to $500 billion a year with China for many, many years.

Q    Thank you, Mr. President.  I’m (inaudible), reporter from Global Times China.  I would like to ask you, what are you expecting China to do in the next step to mediate your relationship with North Korea?  Thank you.

THE PRESIDENT:  To use China?

THE PRESIDENT:  Well, we do.  I mean, China has been very helpful.  President Xi is a great leader.  He’s a highly respected leader all over the world and especially in Asia.  And he’s helped us — Mike, I would say he’s helped us a lot, right?

SECRETARY POMPEO:  He has.

THE PRESIDENT:  We’ve — I actually called him just recently to say, “Hey, you know, whatever you can do on this.”  But he has been very helpful at the border, and he’s been very, very helpful with, I think, North Korea generally.  Could he be a little more helpful?  Probably.  But he’s been excellent.

Q    Mr. President, I’m from China.  My question is: Do you still believe it is possible that the North Korea and U.S. relation could be like the U.S. and the Vietnam relation in the future?

THE PRESIDENT:  You have to go again.

THE PRESIDENT:  Yeah.  I think we’re going have — yeah.  I mean, we have very, very good relations.  And, by the way, speaking of — you mentioned Japan — we have a lot of good things happening Japan.  We have trade talks started.  For years, Japan has been sending millions and millions of cars in, and as you know, it’s not been a very fair situation for the United States.

We’re starting trade talks with Japan.  They actually started about three months ago, and I think we’ll have a very good deal for the United States.  But that’s been a very unfair situation.  Prime Minister Abe understands that, and that’s fine.