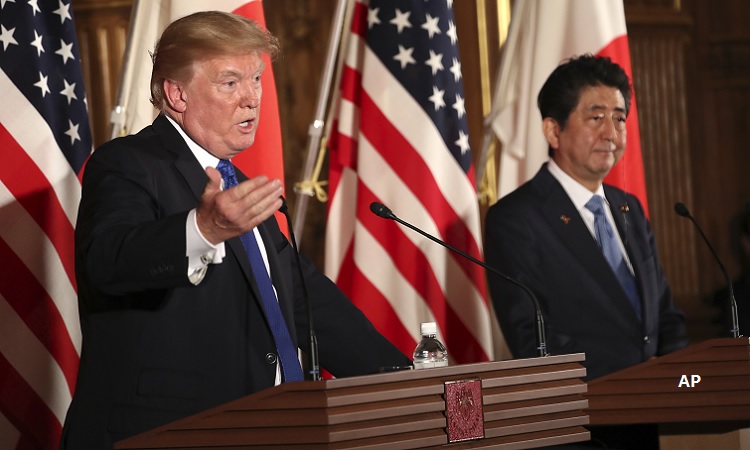 THE WHITE HOUSE
Office of the Press Secretary
November 6, 2017

First, let me congratulate you on your great success in the recent elections.  You won very big and very easily, and I’m not at all surprised.  We both share in common, really, a deep loyalty to our citizens and a deep faith in the destiny of our people and also our people and our countries working together.

Prime Minister, I want to thank you and the people of Japan for your friendship.  We have so many great things that we can accomplish together, and we are in the process of accomplishing those things.

It was a thrill for my daughter, Ivanka, to be able to participate in the World Assembly for Women and promote women entrepreneurship.  Side-by-side, our two nations are advancing polices to empower women and harness the full potential of our great economies.

You were the first foreign leader to visit me shortly after my election, and now it is my pleasure to join you in your homeland to further strengthen the historic ties between our two great nations.

As you know, this is my first visit to the Indo-Pacific region as President — been here before — but as President, this has been my first and it is my first.  And I am thrilled that my first stop was with you, great friend.

Japan is a very special place.  The Japanese people are thriving, your cities are vibrant, and you’ve built one of the world’s most powerful economies.  I don’t know if it’s as good as ours.  I think not.  Okay?  And we’re going to try and keep it that way, but you’ll be second.

And yet, for all of its modern splendor, the people of Japan maintain a profound respect for their rich culture, heritage, and traditions.  Honoring the past, even as you blaze new trails into the future — very, very strongly looking into the future — is Japan.

You demonstrate every day that the respect for history and heritage is the true foundation for progress.  Our nations share an enduring bond.  America and Japan face many challenges, many opportunities.  There are many things we face, but we will be facing them together, in friendship and as allies.

Most importantly, we’re working to counter the dangerous aggressions of the regime in North Korea.  The regime-continued development of its unlawful weapons programs, including its illegal nuclear test and outrageous launches of ballistic missiles directly over Japanese territory, are a threat to the civilized world and international peace and stability.

We will not stand for that.  The era of strategic patience is over.  Some people said that my rhetoric is very strong, but look what’s happened with very weak rhetoric over the last 25 years.  Look where we are right now.

Prime Minister Abe has also shared with me the tragic stories of Japanese young people who North Korea has abducted over the years.  Together, we met with the parents of Megumi Yokota who was abducted as a young girl in 1977.  No child should ever be subjected to such cruelty.  No parent should ever have to endure 40 years of heartbreak.

The United States of America stands in solidarity with the people of Japan against the North Korean menace.  History has proven over and over that strong and free nations will always prevail over tyrants who oppress their people.

Our powerful and enduring U.S.-Japan alliance includes more than 50,000 members of the United States military stationed right here in Japan.  In addition to that, we have 33,000 stationed in South Korea.  American and Japanese military personnel train together, work together, and will stand together to defend the security and sovereignty of both of our countries.

I want to thank the entire Japanese people for acting as such gracious hosts and strong partners for our men and women in the armed forces.

America is also committed to improving our economic relationship with Japan.  As President of the United States, I am committed to achieving a fair, free, and reciprocal trading relationship.  We seek equal and reliable access for American exports to Japan’s markets in order to eliminate our chronic trade imbalances and deficits with Japan.  We’re working on that — something we’ve all been working on very hard from the very beginning of our meetings.

As we continue to pursue closer economic ties, I believe it will create new and exciting opportunities to achieve greater prosperity in both of our nations and to advance new frontiers in science, medicine, and technology.  The United States respects and honors Japan’s heritage and admires your deep well of perseverance.

I appreciate very much your acknowledging and stating the fact that the United States economy has done so well since our election on November 8th.  Close to 2 million jobs.  The highest stock market in our history.  So many different things are happening for the better, including the cutting of massive amounts of regulation, which is one of the reasons that the market is reacting the way it’s reacting.

This mutual respect for culture and sovereignty will continue to bring our nations closer and closer together, and open up new avenues of cooperation and success.

Mr. Prime Minister, thank you again for inviting me today and for opening the arms of your majestic country to our American delegation, all of whom are right now in this room.  I look forward to working side by side with you in friendship.  We will have success like rarely seen between two countries — Japan and the United States of America, two very, very special places.

Thank you for having us.  Thank you very much.

Q    I have a question to President Trump.  You met with the family members of abductees and you met with Hitomi Soga, actual abductee.  How can you comment on your meeting with them?  To North Korea, is there a possibility of U.S. military action?  Suppose that the U.S. decides to go on it, the abductees’ rescue — how do you think about it once the military action is to be imminent?

PRESIDENT TRUMP:  Well, I think it’s very sad.  I look at what’s happened, and it’s a very, very sad thing.  Who has ever heard of anything like this?  Abducted by a hostile country for purposes of language, for purposes of — could be any number of another reasons.  We’ll see what happens in terms of the ultimate conclusion.

But I did put it in my speech at the United Nations, and many people in Japan were really thrilled that I did because a lot of people thought that the folks we’re talking about were forgotten about.  Like I say, the “forgotten people” — where they were, maybe they’re forgotten people.  But I can tell you, your great Prime Minister did not forget.  He didn’t forget at all.

But I spoke with people who were devastated, and they’ve been devastated for many years.  They think they’re alive, but they don’t know.  Probably makes it even tougher that way.  But we’ll see what happens.  Thank you.

Q    Thank you very much.  My first question is to President Trump.  Mr. President, you’ve spent the last two days reaffirming the U.S.-Japan alliance, and you’ve begun sketching out this vision of a free and open Indo-Pacific.  But in two days, you’re going to travel to China, a country that is neither free nor open.  So my question is, how can the U.S. be a force for freedom and openness in this region without inevitably coming into conflict with China?

PRESIDENT TRUMP:  …. As far as China is concerned, my relationship, as you know, with President Xi is also excellent.  I like him a lot.  I consider him a friend.  He considers me a friend.  With that being said, he represents China; I represent the United States.  His views are different on things, but they’re pretty similar on trade.

The problem we have with China is that for decades they’ve been — you know, it’s been a very unfair — let me be very kind to previous administrations — it’s been a very unfair trade situation.  Our trade deficit is massive.  It’s hundreds of billions of dollars a year, anywhere from $350 billion to $504 billion, and that doesn’t include intellectual property.  And we’ve already started discussions with China because it has to come down.  It has to come down.  And that has to do with, really, free trade, fair trade, or reciprocal trade.

And reciprocal trade is very important to me.  We have many countries, not just China or Japan, or so many others that we see.  I mean, we have one country that charges us 100 percent tax if we sell things into that country, and yet when they sell the same product into our country, we charge them nothing.  Now, I’ve been against that for a long time, and you will be seeing, we do things about it

Now, it also takes a period of time to do that, because, as you know, you have statutory limitations in time.  You have to put out notices.  You have to wait 90 days before you can put out the next, and then you have to wait another 120 days, and then a 30-day.  Now, much of this has already been caught and caught up.  Some of it was unnecessary, statutorily.

You will be seeing that the United States will take very, very strong action.  It’s already started, but most of the legal foundation has now been done.  And you’re going to see a very big difference, and it’s going to happen very soon.  Because the United States, by many countries, has been treated very, very unfairly when it comes to trade.