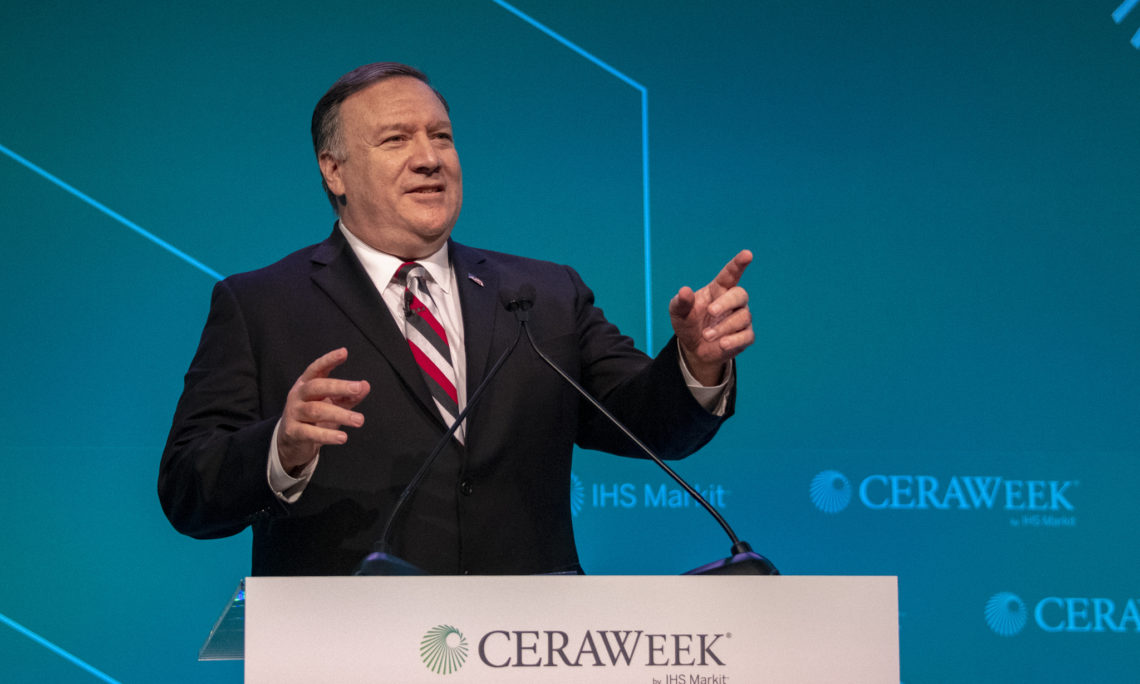 SECRETARY POMPEO:  Thank you, Dan.  Thank you all for joining me.

Our plentiful oil supplies allow us to help our friends secure diversity for their energy resources.  We don’t want our European allies hooked on Russian gas through the NordStream II project any more than we ourselves want to depend on Venezuela for our oil supplies.

This need, this desperate need for diversification is why we exported more crude oil last year to countries all across the globe.  Places as diverse as India, Japan, China, the Republic of Korea, Italy, Ireland, the United Arab Emirates.  The list is long.  It’s why, shortly before the United States made its first LNG shipment to Europe, it made it to a place that people don’t think about, the country of Portugal that now has access to American energy resources.

Our model matters now, frankly, more than ever in an era of great power rivalry and competition where some nations are using their energy for malign ends, and not to promote prosperity in the way we do here in the West.  They don’t have the values of freedom and liberty, of the rule of law that we do, and they’re using their energy to destroy ours.

By blocking development in the South China Sea through coercive means, China prevents ASEAN members from accessing more than $2.5 trillion in recoverable energy reserves.  To contrast, the United States Government promotes energy security for those Southeast Asian nations.  We want countries in the region to have access to their own energy.  We want to help them.  We want to create partnerships. We want transparent transactions, not debt traps.  We explore responsibly.

China doesn’t play by that same set of rules.  Its values are simply different.  You see that in places as diverse as Africa, where they often ship in their own labor, creating jobs for Chinese workers rather than for those in the local economy.  It’s using the debt trap which I referred to just a moment ago to put these countries in a place where it isn’t a commercial transaction, it’s a political transaction designed to bring harm and political influence in the country in which they’re operating.

In Southeast Asia, the United States is the single largest source of cumulative foreign investment.  And the State Department has played an important role in helping investors make good decisions and getting access.  An example is our program about the Indo-Pacific being open.  We call it the Asia Edge Initiative.  It helps Indo-Pacific partners import, produce, and deploy their own energy resources.

The second way, other than investment, is we can promote energy security by encouraging countries to partner with the United States all around the world.  And I’ve seen this at work.  We’re reminding them that we’re simply better to do business with than Russia, China, or Iran.  Our deals come with no hidden strings attached, our contracts are clear, our motives unambiguous.

In the days ahead, you should know, America will continue to be asked to meet the world’s energy demand, especially in places like the Indo-Pacific.  Our private partners are essential to that.  The private sector will be absolutely instrumental.  It certainly can’t be done if the commanding heights are handed to the government.  But neither private enterprise nor the federal government can do it alone.  We need each other.  It is American producers, working in tandem with American diplomats, who can create this stability and prosperity all around the world.

MR YERGIN:  This evening you’ve mentioned, and in other important speeches, the Indo-Pacific concept.  And how do you see the role of the U.S. position itself in terms of the overall growing competition in the region?

SECRETARY POMPEO:  So the challenge that’s presented to America and to the world by China is different than one that we’ve confronted before.  Our National Security Strategy defines how we think about China in the Trump administration.  There are many differences, but one of the most fundamental is we’ve never had another country of the scale of China, with the military of the scale of China’s, that has now expanded into space and property that they do not have a lawful claim to, but with which America has such a deep, intertwined economic and commercial set of relationships.  It was often the case, as it is with certain countries today, that we don’t have those commercial relationships, so we move away and try and drive them out of the marketplace.  China is more complicated and more difficult, but no less challenging to ensuring that America’s wealth creation engine is around 10 and 20 and 30 years from now.

In the Indo-Pacific proper, I don’t travel to any country in Asia, South Asia, Southeast Asia where energy isn’t a topic.  I will be honest; where – depending on where I am, they mention it either in public or in private.  Many of them don’t have the capacity on their own to stand up to the coercive behavior of China, where China moves in and attempts to use its economic clout to influence and control their government.  They all welcome companies from the United States.  They welcome American capacity for the rule of law.  They may not always say this, they may not always speak their mind publicly, but know that I have literally not met a single one of those countries or leaders from one of those countries that didn’t want a more American opportunity, more American resources, more American technology and innovation as part of the mix.