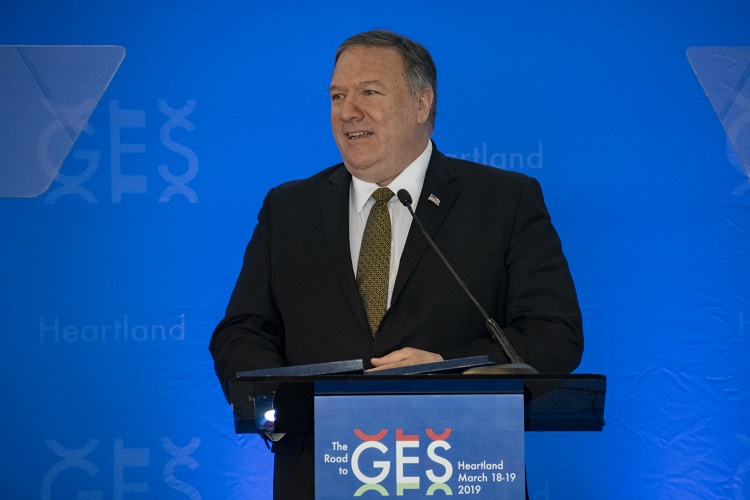 Office of the Spokesperson
Washington, D.C.

I know we have a delegation here from the Netherlands in the audience with us. It’s led by Trade Minister Sigrid Kaag.  ….

[The United States is] proud to cohost, along with the Netherlands, the Global Entrepreneurship Summit alongside you in The Hague on June 4th and 5th.

First, the President’s foreign policy. You don’t put entrepreneurship and foreign policy in the same buckets all the time, but I must say one of the things I learned as a small businessman is if you do the things the way they were done before, you’ll fail. You have to rethink the old ways of doing things. And President Trump has certainly done that.

A good example is North Korea. We came into the administration with missiles being fired and nuclear tests being conducted. Every approach taken over the past two decades had failed. Previous administrations had tried many approaches.

We decided we would do something different: We coordinated a global effort, a global economic sanctions campaign to raise the stakes for the regime to impose cost on them, but to do so at the same time by extending a diplomatic hand in pursuit of peaceful progress with North Korea.

We’re not done. Hard work remains. The President and I were in Hanoi now a couple weeks back to build on what had happened in the Singapore summit, but we’ve brought about a situation that has never occurred with respect to the Korean Peninsula.

We currently have both the toughest sanctions in history as well as the most promising diplomatic campaign in history too. We hope this combination will lead to a safer, more secure region in Southeast Asia and around the world.

Another lesson I learned as an entrepreneur was the importance of forging strong partnerships.

I see this every day in diplomacy.

America cannot do what it needs to do around the world alone. We have to bring together multiple partners under a single mission, and empower each of those partners to deliver those results.

…. From Iran to North Korea, from the work that we’ve done to strengthen NATO, the coalition we’re building out in the Indo-Pacific to counter the threat that China presents to the world, the Trump administration is working diligently to build the partnerships that you all do each and every day in your business life. We’re empowering those partners to deliver on their own for their people and to have a shared set of – a set of shared objectives that deliver for the entire world.

… [A]s I travel the world and see all the others, [the free enterprise system] is the only system where a business started in a dorm room can disrupt a billion-dollar industry, and where risk-takers can rise from the crowd if they’ll work hard and have a good idea. People from all walks of life will use their talent and work hard and be successful. It’s worthy of comparing what I see elsewhere – countries that don’t have that model – comparing it to socialism, which puts government bureaucrats in control of the economy, and which failed spectacularly every single place it has been tried.