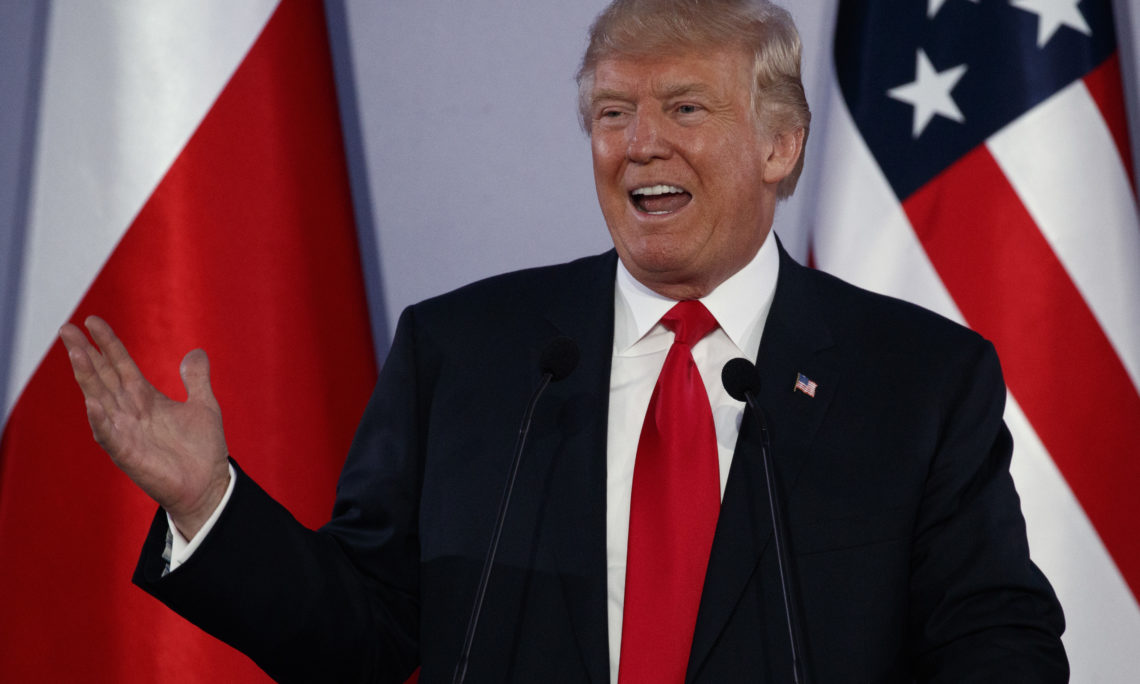 THE WHITE HOUSE
Office of the Press Secretary
July 6, 2017

EXCEPTS OF REMARKS BY PRESIDENT TRUMP
TO THE PEOPLE OF POLAND

It is a profound honor to stand in this city, by this monument to the Warsaw Uprising, and to address the Polish nation that so many generations have dreamed of:  a Poland that is safe, strong, and free.  (Applause.)

The triumph of the Polish spirit over centuries of hardship gives us all hope for a future in which good conquers evil, and peace achieves victory over war.

For Americans, Poland has been a symbol of hope since the beginning of our nation.  Polish heroes and American patriots fought side by side in our War of Independence and in many wars that followed.  Our soldiers still serve together today in Afghanistan and Iraq, combatting the enemies of all civilization.

For America’s part, we have never given up on freedom and independence as the right and destiny of the Polish people, and we never, ever will.  (Applause.)

Through four decades of communist rule, Poland and the other captive nations of Europe endured a brutal campaign to demolish freedom, your faith, your laws, your history, your identity — indeed the very essence of your culture and your humanity.  Yet, through it all, you never lost that spirit.  (Applause.)  Your oppressors tried to break you, but Poland could not be broken.  (Applause.)

And when the day came on June 2nd, 1979, and one million Poles gathered around Victory Square for their very first mass with their Polish Pope, that day, every communist in Warsaw must have known that their oppressive system would soon come crashing down.  (Applause.)  They must have known it at the exact moment during Pope John Paul II’s sermon when a million Polish men, women, and children suddenly raised their voices in a single prayer.  A million Polish people did not ask for wealth.  They did not ask for privilege.  Instead, one million Poles sang three simple words:  “We Want God.”  (Applause.)

In those words, the Polish people recalled the promise of a better future.  They found new courage to face down their oppressors, and they found the words to declare that Poland would be Poland once again.

A strong Poland is a blessing to the nations of Europe, and they know that.  A strong Europe is a blessing to the West and to the world.  (Applause.)  One hundred years after the entry of American forces into World War I, the transatlantic bond between the United States and Europe is as strong as ever and maybe, in many ways, even stronger.

This continent no longer confronts the specter of communism.  But today we’re in the West, and we have to say there are dire threats to our security and to our way of life.  You see what’s happening out there.  They are threats.  We will confront them.  We will win.  But they are threats.

During a historic gathering in Saudi Arabia, I called on the leaders of more than 50 Muslim nations to join together to drive out this menace which threatens all of humanity.  We must stand united against these shared enemies to strip them of their territory and their funding, and their networks, and any form of ideological support that they may have.  While we will always welcome new citizens who share our values and love our people, our borders will always be closed to terrorism and extremism of any kind. ….  We are fighting hard against radical Islamic terrorism, and we will prevail.  We cannot accept those who reject our values and who use hatred to justify violence against the innocent.

Today, the West is also confronted by the powers that seek to test our will, undermine our confidence, and challenge our interests.  To meet new forms of aggression, including propaganda, financial crimes, and cyberwarfare, we must adapt our alliance to compete effectively in new ways and on all new battlefields.

We urge Russia to cease its destabilizing activities in Ukraine and elsewhere, and its support for hostile regimes — including Syria and Iran — and to instead join the community of responsible nations in our fight against common enemies and in defense of civilization itself.  (Applause.)

Finally, on both sides of the Atlantic, our citizens are confronted by yet another danger — one firmly within our control.  This danger is invisible to some but familiar to the Poles:  the steady creep of government bureaucracy that drains the vitality and wealth of the people.  The West became great not because of paperwork and regulations but because people were allowed to chase their dreams and pursue their destinies.

Americans, Poles, and the nations of Europe value individual freedom and sovereignty.  We must work together to confront forces, whether they come from inside or out, from the South or the East, that threaten over time to undermine these values and to erase the bonds of culture, faith and tradition that make us who we are.  (Applause.)  If left unchecked, these forces will undermine our courage, sap our spirit, and weaken our will to defend ourselves and our societies.

But just as our adversaries and enemies of the past learned here in Poland, we know that these forces, too, are doomed to fail if we want them to fail.  And we do, indeed, want them to fail.  (Applause.)  They are doomed not only because our alliance is strong, our countries are resilient, and our power is unmatched.  Through all of that, you have to say everything is true.  Our adversaries, however, are doomed because we will never forget who we are.  And if we don’t forget who are, we just can’t be beaten.  Americans will never forget.  The nations of Europe will never forget.  We are the fastest and the greatest community.  There is nothing like our community of nations.  The world has never known anything like our community of nations.

We write symphonies.  We pursue innovation.  We celebrate our ancient heroes, embrace our timeless traditions and customs, and always seek to explore and discover brand-new frontiers.

We reward brilliance.  We strive for excellence, and cherish inspiring works of art that honor God.  We treasure the rule of law and protect the right to free speech and free expression.  (Applause.)

We empower women as pillars of our society and of our success.  We put faith and family, not government and bureaucracy, at the center of our lives.  And we debate everything.  We challenge everything.  We seek to know everything so that we can better know ourselves.  (Applause.)

And above all, we value the dignity of every human life, protect the rights of every person, and share the hope of every soul to live in freedom.  That is who we are.  Those are the priceless ties that bind us together as nations, as allies, and as a civilization.

What we have, what we inherited from our — and you know this better than anybody, and you see it today with this incredible group of people — what we’ve inherited from our ancestors has never existed to this extent before.  And if we fail to preserve it, it will never, ever exist again.  So we cannot fail.

This great community of nations has something else in common:  In every one of them, it is the people, not the powerful, who have always formed the foundation of freedom and the cornerstone of our defense.  The people have been that foundation here in Poland — as they were right here in Warsaw — and they were the foundation from the very, very beginning in America.

That is why we applaud Poland for its decision to move forward this week on acquiring from the United States the battle-tested Patriot air and missile defense system — the best anywhere in the world.  (Applause.)  That is also why we salute the Polish people for being one of the NATO countries that has actually achieved the benchmark for investment in our common defense.  ….

We have to remember that our defense is not just a commitment of money, it is a commitment of will.  Because as the Polish experience reminds us, the defense of the West ultimately rests not only on means but also on the will of its people to prevail and be successful and get what you have to have.  The fundamental question of our time is whether the West has the will to survive.  Do we have the confidence in our values to defend them at any cost?  Do we have enough respect for our citizens to protect our borders?  Do we have the desire and the courage to preserve our civilization in the face of those who would subvert and destroy it?  (Applause.)

We can have the largest economies and the most lethal weapons anywhere on Earth, but if we do not have strong families and strong values, then we will be weak and we will not survive.  (Applause.)  If anyone forgets the critical importance of these things, let them come to one country that never has.  Let them come to Poland.  (Applause.)  And let them come here, to Warsaw, and learn the story of the Warsaw Uprising.

The memories of those who perished in the Warsaw Uprising cry out across the decades, and few are clearer than the memories of those who died to build and defend the Jerusalem Avenue crossing.  Those heroes remind us that the West was saved with the blood of patriots; that each generation must rise up and play their part in its defense — (applause) — and that every foot of ground, and every last inch of civilization, is worth defending with your life.

Our own fight for the West does not begin on the battlefield — it begins with our minds, our wills, and our souls.  Today, the ties that unite our civilization are no less vital, and demand no less defense, than that bare shred of land on which the hope of Poland once totally rested.  Our freedom, our civilization, and our survival depend on these bonds of history, culture, and memory.

And today as ever, Poland is in our heart, and its people are in that fight.  (Applause.)  Just as Poland could not be broken, I declare today for the world to hear that the West will never, ever be broken.  Our values will prevail.  Our people will thrive.  And our civilization will triumph.  (Applause.)