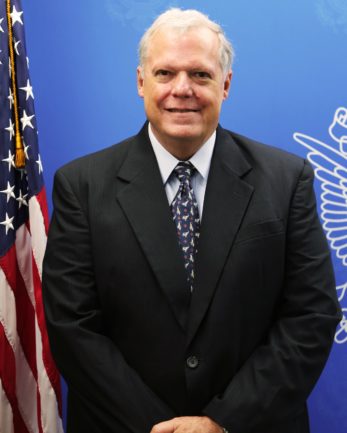 Mr. Jamie Fouss arrived in Wuhan to serve as the Consul General in August 2017. His previous postings have been in Taipei, Beijing, Guangzhou, Dhaka, and Hyderabad. Prior to joining the Department of State, Jamie worked for five years at the Philippine Refugee Processing Center (PRPC), preparing Southeast Asian refugees to resettle in the United States. He also worked with Peace Corps for several years as a country desk officer at Peace Corps headquarters and then associate director in Western Samoa—where he had served as a volunteer—and country director in the Marshall Islands. Jamie has also worked as a cross-cultural training curriculum developer with Berlitz Cross-Cultural and later with Training Management Corporation in Princeton, New Jersey. Jamie grew up in a military family and graduated high school in Okinawa, Japan. He has a BA in anthropology from the University of Colorado – Boulder and an MA from the School for International Training in Brattleboro, Vermont. Jamie and his wife, Esmeeh, who also worked as a teacher at PRPC, have been married over 30 years. They have two grown sons who live in the United States.