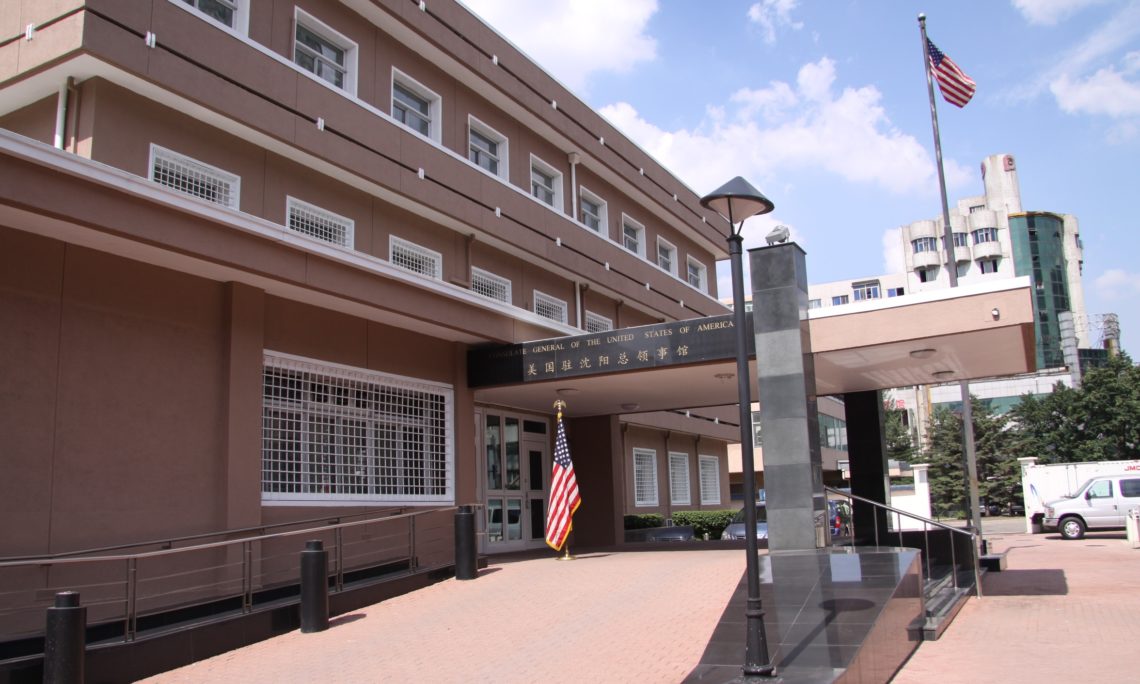 The U.S. Consulate in Shenyang was opened in 1904.  It was originally housed in two abandoned Chinese temples, “ Temples ‘Yi Kung Ssu’ and ‘Scwang Chen Ssu’ located outside the Little West Commerce Gate.”  Sometime before 1924, the Consulate moved to No. 1 Wu Wei Lu, a building which used to house the Russian Consulate.  At that time, the United States had several other Consulates in Northeast China, including in Harbin and Dalian.  These appear to have been closed by World War II.   The Shenyang Consulate was able to continue operations for most of the war but closed in 1949 after the new Chinese Communist Party authorities had imprisoned the remaining consulate staff in their offices for almost a year before expelling them.  In 1984, five years after the United States recognized formally established diplomatic relations with the government in Beijing, the Consulate reopened; today it plays a key part in the management of the close relationship the United States has with northeast China.

In the early part of the 20th century, northeast China underwent enormous economic development and population growth.    Due primarily to the advent of the railroads developed by Japanese and Russian interests and the rapid in-migration of settlers from Shandong Province and the Korean Peninsula,  Shenyang (known then as “Mukden” to most Americans), Harbin, Dalian, Changchun, and other places grew from almost nothing  into major cities.  For the Americans who were stationed there in the 1930s and 40s, however, Shenyang increasingly resembled a frontier outpost marked by adventure and danger.  Consulate staff dealt with rampant lawlessness, violence, and the complex conflict in Manchuria between an increasingly large Japanese presence in the region, continuing Chinese resistance, and lingering Russian influence.

Several articles from the period reported failed attempts to bomb the American and British consulates, hijacking and attacks on trains, bank robberies, thefts, murders, kidnapping, and general mayhem, especially in 1932. [i] One telling example: after “bandits” unsuccessfully attacked the American Consul General during a golf game, Americans began to carry guns whenever they went out to the golf course. [ii] According to the New York Times, the 700 mile long South Manchurian railway was raided an average of 42 times daily that year. [iii] And several months previously, a Japanese military patrol beat up an American official, Culver B. Chamberlain, while he was on his way to Harbin to become Consul there. [iv] In 1934, the New York Times reported another rather minor but interesting episode: “A uniformed Japanese ran amok today at the United States Consulate, waving a bayonet.”   Vice Consul Monroe B. Hall, according to the paper’s entertaining account, “hearing the noise, investigated, and found the intruder brandishing a bayonet.”  Hall then “picked up a chair and engaged the man, shouting to Vice Consuls Gerald Warner and Andrew Eson for help.”  Warner and Eson responded with “improvised weapons,” and the three of them fought the crazed soldier off.  Complaints to the Japanese Consulate resulted in the soldier’s arrest a few hours later.[v]

After Pearl Harbor, the Imperial Japanese forces took Vice Consul U. Alexis Johnson – later a senior official in the Kennedy and Johnson State Departments – and his staff prisoners.  Released in 1942, Johnson and his staff returned to the United States, along with the American ambassador to Japan, Joseph Grew, and other civilians unlucky enough to have been captured by the Japanese in Asia.  As Time magazine told the story, Johnson rushed down the gangplank of the neutral Swedish ship that had ferried him back to the United States, yelling at the assembled reporters, “I don’t want to talk to newspapermen. I want to talk to my wife. I haven’t seen her in three years.” [vi] The magazine continued:

[Johnson] spied her in the crowd, walked up to her slowly, gravely.

They didn’t kiss; didn’t even shake hands. They just looked at each other for a long while, then walked off and got in a cab.

Other Americans were less fortunate.  As the war escalated, Shenyang became a holding ground for about 1,700 American and Allied POWs captured by the Japanese from places as far away as the Philippines.  They were treated brutally – 700 of them died – and the healthiest survivors were barely able to walk when they were liberated in 1945 by Soviet soldiers.  [vii] The Shenyang municipal government has worked with survivors’ groups and turned the restored POW camp into a museum.

After the end of World War II, the American diplomatic presence in northeast China resumed when Consul General O. Edmund Clubb reopened the Shenyang Consulate in 1945 only to face severe challenges during the final stages of the Chinese Civil War.  In November of 1948, with the American-supported Nationalist party in retreat in China, Communist Party forces captured Shenyang and, sparked by the onset of the Cold War, relations between China and the United States became increasingly tense.  In 1948, the Communist authorities even went so far as to confine the American staff in Shenyang, now led by Consul General Angus Ward, to the grounds of the Consulate for nearly a year.  By 1950, the United States had withdrawn all its diplomats from China.

Contact between the United States and China resumed again when Richard Nixon and Henry Kissinger reached out to Beijing in 1972.  Five years after America and the People’s Republic of China established diplomatic relations, the United States reopened its Consulate in Shenyang in 1984.  One goal was to help open northeast China — with its enormous population of 91 million people and nearly 40 percent of China’s heavy industry — to American investment.  There were geopolitical reasons, as well, relating to Chinese relations with the former Soviet Union and North Korea.

In recent years, a series of American companies – including Intel, John Deere, Johnson Controls, Dell, Citibank, Cessna and other major U.S. firms have all made significant investments in the region, particularly in the port city of Dalian.  Major Chinese and U.S. universities have established strong exchange programs, and the U.S. Consulate has an active program of public outreach to local government, business, students, media, and cultural leaders, as well as to the general public.

As political cooperation continues to deepen between the United States and China, the Consulate has also played a vital role in meetings between American officials and their counterparts in northeast China.  Because of its proximity to the border with North Korea, the Consulate has also worked with local Chinese counterparts on issues related to the DPRK, including nuclear nonproliferation.

[vii] Song Lijun. “POWs’ painful memories of war.”  China Daily.  Clipping does not have a page number or date.