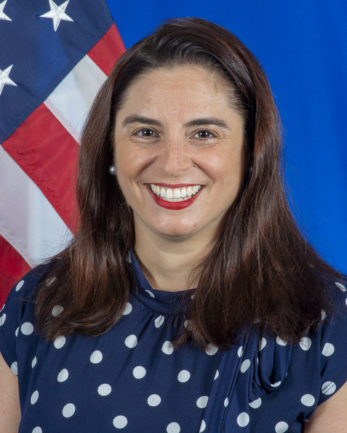 Nancy Abella arrived in China on August 1, 2019, to serve as Consul General at the United States Consulate General in Shenyang.

Ms. Abella joined the State Department in April 2001, and is a career member of the U.S. Foreign Service. She served two previous assignments in China at the U.S. Consulate General in Shanghai and at the U.S. Embassy in Beijing. She has also worked overseas at the U.S. Embassy in Banjul, The Gambia, and embedded with U.S. military forces at a U.S. Provincial Reconstruction Team in Farah, Afghanistan.

Ms. Abella’s most recent Washington, D.C, assignment was in the State Department Bureau of East Asian and Pacific Affairs, Office of Mainland Southeast Asia. Previously, she worked in Washington at the State Department 24-Hour Operations Center, the Bureau of Consular Affairs, the White House National Security Council, and the Office of the Counselor to the Secretary of State.

Ms. Abella was born in New Jersey and grew up in Connecticut. She graduated from the Georgetown University Edmund A. Walsh School of Foreign Service with a Bachelor of Science, and speaks Chinese Mandarin and Spanish.