Welcome to the website for the U.S. Consulate General in Shenyang. Based in northeast China, the U.S. Consulate General in Shenyang serves a consular district comprised of Liaoning, Jilin and Heilongjiang Provinces. The Consulate works to meet the needs of American citizens and U.S. companies in our district, as well as promote the diplomatic goals of the United States government. The Consulate works in a variety of areas which enhance the relationship between the United States and China, including consular, commercial, economic, political, cultural, and educational themes. 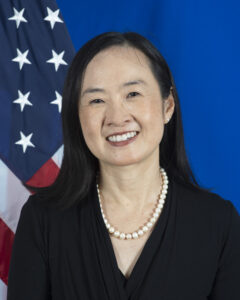 Sara Yun assumed her position as the U.S. Consul General in Shenyang on August 24, 2022.  She is a career member of the Foreign Service at the U.S. Department of State.  Her recent assignments include serving as a Senior Advisor in the State Department’s Bureau of East Asian and Pacific Affairs and as the Director for Global Economic Engagement on the National Security Council and the National Economic Council at the White House.

Ms. Yun was also a Senior Advisor to the Deputy Secretary of State for Management and Resources and staffed two different Under Secretaries of State for Economic, Energy, and the Environment.  She has also served as a Senior Watch Officer in the State Department’s Operations Center.  Her overseas assignments include Beijing, China; Ankara, Turkey; Baghdad, Iraq; and, Shanghai, China.  She has received the State Department’s Superior Honor and Meritorious Honor Awards on multiple occasions.

Ms. Yun has a bachelor’s degree from the College of William and Mary in government.

She also earned master’s degrees from the Fletcher School (Tufts University) and from the National Defense University’s College of International Security Affairs. 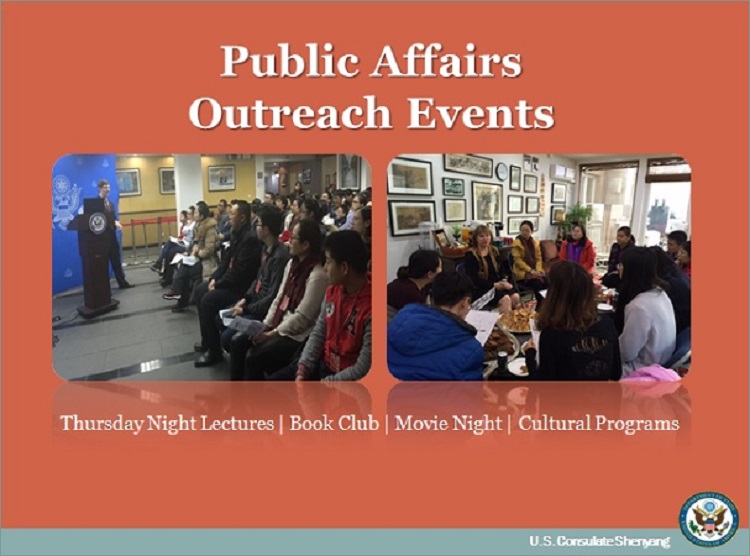 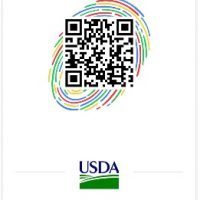 On political issues, the section supports the Consulate Mission by reporting on a variety of subjects, from human rights to political changes in the leadership. The section also supports visiting U.S. government delegations and maintains contacts with a variety of Chinese government organizations.

The section is responsible for monitoring economic, trade and investment trends in Northeast China, managing U.S.-China economic relations and maintaining contacts with economic officials, businesses, academia and media to inform and improve bilateral economic policies. Additional responsibilities cover a range of diverse issues including wildlife protection, energy and infectious disease in Northeast China, as well as the operation of the Consulate’s air monitoring program.

As Northeast China’s economy grows, the section works closely with the Foreign Commercial Section to support U.S. companies in the region and to link investors from the region with potential investments in the United States. Business investment in the United States, whether in the form of new equipment or facilities or the expansion of existing facilities, is a major engine of economic growth and job creation. As a place to do business, the United States offers a hardworking, diverse, and educated workforce, strong protection of intellectual property rights, a predictable and transparent legal system, relatively low taxes, highly developed infrastructure, and access to the world’s most lucrative consumer market. Many sections in the consulate, including the Agriculture Trade Office, the Foreign Commercial Section, and the Political, Economic, and ESTH section coordinate to arrange investment conferences and support targeted matchmaking opportunities for investors from Northeast China.

The Public Affairs Section of the U.S. Consulate General in Shenyang is responsible for promoting a greater understanding of American life, society, economy, politics, education and culture.  The Public Affairs Section carries out the U.S. Government’s information, cultural and educational exchange programs in the Shenyang consular district. The section also serves as the official voice of the United States in northeast China.

Follow us on our Weibo page for the latest updates: U.S. Consulate General Shenyang Weibo

The Bureau of Diplomatic Security (DS) is a unique organization that plays an essential role within the U.S. Department of State. The Bureau’s personnel – who include special agents, engineers, diplomatic couriers, Civil Service specialists, and contractors-work together as a team to ensure that the State Department can carry out its foreign policy missions safely and securely.

Diplomatic Security has a broad scope of global responsibilities, with protection of people, information, and property as its top priority. Overseas, DS develops and implements effective security programs to safeguard all personnel who work in every U.S. diplomatic mission around the world. In the United States, the Bureau protects the Secretary of State, the U.S. Ambassador to the United Nations, and foreign dignitaries below the head-of-state level who visit the United States. DS develops and implements security programs to protect the more than 90 domestic State Department facilities as well as the residence of the Secretary of State.

With the addition of the Office of Foreign Missions in 1996, DS assumed the responsibilities of servicing and regulating the activities of all foreign missions in the United States.

The Shenyang RSO can be contacted at DS_RSO_Shenyang@state.gov.