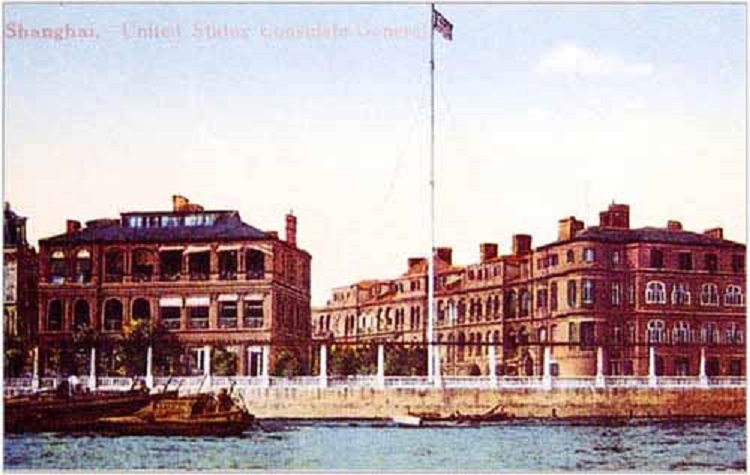 The United States Consulate General in Shanghai is among the oldest American diplomatic and consular posts in the Far East, and the second oldest in China.

The first American consular presence in Shanghai dates to the mid-nineteenth century, following the conclusion of a treaty of “peace, amity, and commerce” between the United States and the Qing Dynasty in 1844.  In the absence of an officially appointed consul, American businessman Henry Wolcott — local agent for a Boston trading company — raised the Stars and Stripes above his company office near the Bund and became the first Acting U.S. Consul in Shanghai.

In 1854, in recognition of growing American trade and interests in the port city, the United States Government appointed Robert Murphy the first professional American Consul in Shanghai.  His offices were located at 36 Huangpu Road, north of Suzhou Creek, in the area that would soon become the center of Shanghai’s American Settlement.  As Shanghai’s linkages with the West grew, so too did the American Consulate.

President Lincoln named George Seward to be Consul in 1861 and promoted him to Consul General two years later.  During his fifteen years in Shanghai, Seward oversaw the expansion of the American Settlement and its merger with the Foreign Settlement, creating a joint International Settlement.  By the early twentieth century, more than 1,500 Americans called Shanghai home.  The American community contributed to the economy and life of the city, founding businesses, hospitals, schools, and educational exchanges.  In 1916, the Consulate General moved to new buildings at 13-14 Huangpu Road to accommodate a quickly growing staff and range of responsibilities.  These new offices — at a cost of $355,000 — were the most expensive U.S. embassy or consulate in the world at that time.  By the 1930s, the Consulate General hosted a staff of ten State Department officials, a trade commissioner from the Department of Commerce, and an agent from the Department of Agriculture, as well as the U.S. Court for China, a jail, wharf, post office, and a parade ground for visiting Navy and Marine detachments.

From World War to Cold War

In the years prior to World War II, Shanghai was the seventh largest city in the world, and had become the financial and commercial center of Asia.  Years of trade and interaction with the West were thrown into disarray, however, beginning with the 1932 Japanese attack on Shanghai’s northern Zhabei District.  In 1933, events pushed the U.S. Consulate General south of Suzhou Creek, leaving the old American Settlement for the first time in nearly 80 years.  First located in the old Kalee Hotel at 248-250 Jiangxi Road, the Consulate in 1936 moved to the Development Building on the southwest corner of Jiangxi Road and Fuzhou Road.  By December 1941, however, Japanese advances into Shanghai forced the closure of the Consulate for the duration of the war.

On September 5, 1945, less than a month after Japan’s surrender, the U.S. Consulate General resumed operations in the old Glen Line Building at 28 The Bund — the wartime home of the German Consulate.  Post-war Shanghai was a different city; the foreign settlements had been abolished and civil war soon engulfed the country.  On May 29, 1949, the People’s Liberation Army entered Shanghai.  The new Communist government did not recognize the diplomatic status of the Consulate staff, and on April 25, 1950, Consul General Walter McConaughy lowered the American flag and closed the Consulate.  It was not until decades later that formal diplomatic relations between China and the United States were reestablished, and the Consulate could reopen.

Shanghai itself came to symbolize the normalization of Sino-U.S. relations in 1972, with the issuance of the Shanghai Communiqué.  On April 28, 1980, almost exactly 30 years after it closed, the United States Consulate General in Shanghai reopened at its present location at 1469 Central Huai Hai Road.  A member of the old Consulate’s Chinese staff later presented Consul General Donald Anderson with the same flag that his predecessor had lowered three decades earlier.  It now hangs in the Consulate’s reception rooms as a symbol of the historic ties between the old Consulate and the new.

The current Consulate property was built in 1921.  The main house is a villa in the French Renaissance style.  Prior to the Consulate assuming the lease, the property hosted numerous and varied occupants.  The first was Jardine, Matheson and Co., the largest British trading firm in Asia at the time.  During World War II, a Japanese businessman and his family, and later the Swiss Consul General, took up residence in the house.  In 1946, Rong Hongyuan (Yung Hungyuen), scion of a wealthy textile family, bought the property, but fled Shanghai soon after.  Following the establishment of the People’s Republic of China, the house was used by the All China Women’s Federation, was a center for “political education” during The Cultural Revolution, and finally served as a government guesthouse prior to the U.S. Consulate taking the lease.  The present Consulate property sits on three acres, and includes several outbuildings, an orange grove, a Chinese rock garden, and a carp pond.  Extensive renovations, both to the interior and exterior of the building, were carried out in 1997 and 2003-2005 to preserve the beauty of the property and to upgrade the building’s effectiveness as a work place.

As Shanghai continues to grow, and Sino-U.S. relations develop deeper and broader linkages, the work of the U.S. Consulate General in Shanghai also continues to grow and expand.  Shanghai has again become a major center of commerce and trade, and is a potent symbol of China’s rising status.  American businesses and citizens have returned to the city in large numbers.  The Consulate General’s large staff works to support and promote American interests, assist U.S. companies and private American citizens, and promote exchanges and dialogue between Chinese and American individuals and institutions.  Much has changed in the past century and a half since the United States established a consular presence in Shanghai, but much has also remained the same: the relationship between the Consulate and Shanghai is as vibrant, dynamic and durable as Shanghai itself.

The Consular office is located in the Westgate mall, while the Public Affairs Section, Agricultural Trade Office, and Foreign Commercial Service are located in the Shanghai Centre (in the Portman Ritz-Carlton complex). For contact details, click below.