Consulate General Guangzhou officially opened on August 31, 1979, though the United States has had a consular presence in Guangzhou beginning in the late 1700s.

The U.S. Consulate General in Guangzhou serves four provinces, Fujian, Guangdong, Guangxi, and Hainan with a combined population exceeding 204 million, with 44 cities of more than a million. The region, once known as the “world’s workshop,” is transitioning away from labor-intensive light industry toward advanced machine manufacturing and technological innovation.

The United States Consulate General facility in Guangzhou, China, represents a new era in the design of diplomatic platforms. When we acquired the site in 2001, the 7.4 acres lot was covered with fields–rice paddies and fish farms. By the time the facility opened in summer 2013, it was surrounded by skyscrapers. The U.S. Consulate continues to meet the needs of American citizens and U.S. companies, as well as promote the diplomatic goals of the United States government. Much as Guangzhou has acted as the world’s window into its most populous country, so the Consulate serves as America’s link to South China. 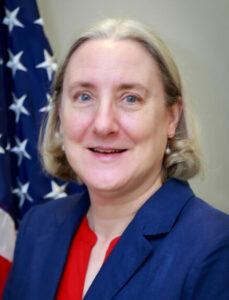 Lisa K. Heller assumed the role of Consul General of the Consulate General of the United States of America in Guangzhou, China on August 31, 2021. She is a career member of the U.S. Senior Foreign Service and brings more than 35 years of experience working on U.S.-China relations.

In addition to serving as the Minister-Counselor of Public Affairs at the U.S. embassies in Beijing and Islamabad, Ms. Heller’s other postings include the U.S. Embassy in Seoul, Republic of Korea; the U.S. Embassy in Kyiv, Ukraine; and the U.S. Consulate General in Shenyang, China.  In Washington, she has been the Director of the Office of Public Diplomacy in the Bureau of East Asian and Pacific Affairs, as well as the Deputy Director of the Office of Africa and Europe in the Bureau of Democracy, Human Rights, and Labor.

Ms. Heller has a B.A. from Princeton University and an M.P.A. from the University of Minnesota. Together with her diplomat spouse James Heller, she has two adult children.

Doing Business with the Consulate

Doing Business with the Consulate