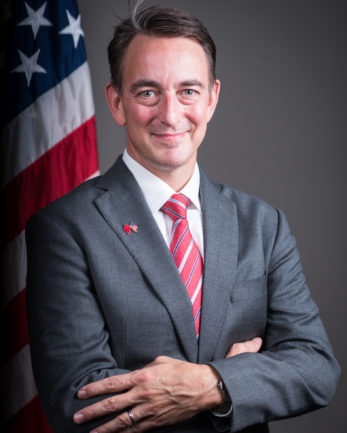 Jim Mullinax began his assignment as U.S. Consul General in Chengdu, China in August 2017. Prior to this position, he served as Economic Counselor at the U.S. Embassy in Jakarta. He has spent the majority of his career in Asia, previously serving in Manila, Philippines; Surabaya, Indonesia; Taipei; Hong Kong; and Shanghai.

In Washington, Jim served as the Acting Director of the East Asia and Pacific Economic Policy Office where, in addition to preparing senior officials for APEC and ASEAN ministerial meetings, he led initiatives to promote senior level commercial advocacy at multilateral meetings and to encourage foreign investment in the United States. He also worked in the Economic Bureau’s Office of Monetary Affairs, where he was responsible for macroeconomic analysis and U.S. policy on debt relief and restructuring for African and Eastern European nations.

Jim is a graduate of the University of Puget Sound, and holds an MA from Ohio University and an MPA from the Kennedy School of Government at Harvard University.  He speaks Mandarin Chinese and Indonesian. He is married to well-known food writer Tzu-I Chuang Mullinax and they have two sons.