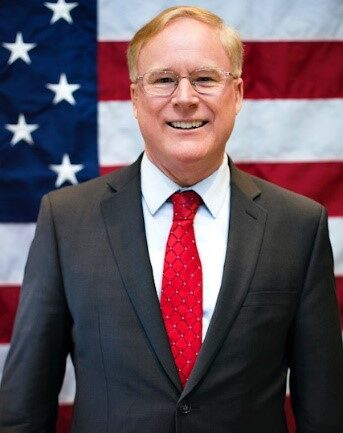 Chargé Forden is one of the U.S. State Department’s most experienced China specialists.  He served twice previously in U.S. Embassy Beijing (1995-1998 and 2007-2011) and was Deputy Director and Political Chief of the Department of State’s Office of Chinese and Mongolian Affairs (2005-2007).  He was also Deputy Director of the American Institute in Taiwan (AIT) (2015-2018) in Taipei, and headed AIT’s Kaohsiung Branch Office (2002-2005).  Chargé Forden’s other assignments include serving as Economic Officer at the U.S. Embassies in Tel Aviv and Hanoi.  His background in China started early; he taught English at universities in Shenyang and Beijing from 1981 to 1983.

Chargé Forden has a B.A. in Politics from the University of California and did his postgraduate work in International Trade and Asian Diplomatic History at the Fletcher School of Law & Diplomacy.  His foreign languages are Mandarin Chinese and Vietnamese.

He is from Southern California and is married to Hui-chuan (Jasmine) Chi, an American originally from Taiwan. They have two grown daughters and a son.