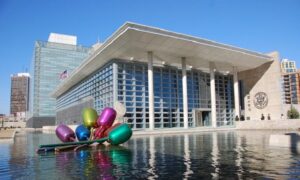 The US Embassy in Beijing serves as the bilateral mission between China and the United States, housing more than 20 federal agencies. The various offices are listed under Sections and Offices. For Visa and American Citizens’ Services also see separate sections in main menu of this site.

Diplomatic relations between China and the United States date back to 18th century, which makes China one of the countries in Asia with the longest diplomatic ties to the United States. See the Office of the Historian for more background information on U.S. diplomatic history or visit our History of the U.S. and China page.

The U.S. Embassy has an air quality monitor to measure PM 2.5 particulates as an indication of the air quality on the Embassy compound located in Chaoyang district.  Pollutants such as particle pollution are linked to a number of significant health effects — and those effects are likely to be more severe for sensitive populations, including people with heart or lung disease, children, and older adults.  This monitor is a resource for the health of the American community.  Citywide analysis cannot be done, however, on data from a single machine.

Particulates less than 2.5 micrometers in diameter (PM 2.5) are referred to as “fine” particulates and are believed to pose the largest health risks.  PM 2.5 is a standard recognized by the U.S. Environmental Protection Agency (EPA) and allows us to compare against U.S. standard measures.  PM 2.5 particulates are of concern since they are small enough to directly enter the lungs and even the blood stream.  For more information, please visit the EPA site.

The U.S. EPA has developed a formula to convert PM 2.5 readings into an air quality index (AQI) value that can help inform health-related decisions. For example, an AQI value of 50 represents good air quality with little potential to affect public health, while an AQI value over 300 represents hazardous air quality. Please note that AQI is different from the Air Pollution Index (API) used in China. For more information on AQI and how it is calculated, please click here.

The monitor’s measurements, expressed in the form of PM 2.5 concentration (micrograms per cubic meter, µg/m3) and corresponding AQI, are available on Twitter .