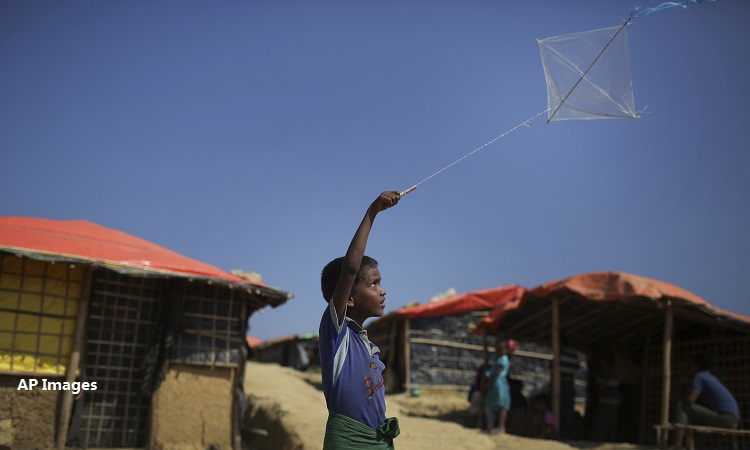 In this Nov. 21, 2017, file photo, a Rohingya Muslim flies his kite outside his family's tent, in Kutupalong refugee camp in Bangladesh. Since late August, more than 620,000 Rohingya have fled Myanmar's Rakhine state into neighboring Bangladesh, seeking safety from what the military described as "cl

I visited Naypyitaw, Burma on November 15, where I met separately with State Counsellor Aung San Suu Kyi and the Commander-in-Chief of the Armed Forces, Senior General Min Aung Hlaing. I reaffirmed the United States’ strong commitment to Burma’s successful democratic transition as the elected government strives to implement reforms, bring peace and reconciliation to the nation, and resolve a devastating crisis in Rakhine State. Our first priority is to relieve the intolerable suffering faced by so many. In response to the dire situation, I announced last week an additional $47 million in humanitarian assistance for those affected by the Rakhine State crisis, bringing the total amount spent in response to this crisis to more than $87 million since August of this year.

Burma’s response to this crisis is vital to determining the success of its transition to a more democratic society. As I said in Naypyitaw, the key test of any democracy is how it treats its most vulnerable and marginalized populations, such as the ethnic Rohingya and other minority populations. Burma’s government and security forces must respect the human rights of all persons within its borders, and hold accountable those who fail to do so.

I reiterate the United States’ condemnation of August 25 attacks on security forces by the Arakan Rohingya Salvation Army (ARSA). Yet no provocation can justify the horrendous atrocities that have ensued. These abuses by some among the Burmese military, security forces, and local vigilantes have caused tremendous suffering and forced hundreds of thousands of men, women, and children to flee their homes in Burma to seek refuge in Bangladesh. After a careful and thorough analysis of available facts, it is clear that the situation in northern Rakhine state constitutes ethnic cleansing against the Rohingya.

Those responsible for these atrocities must be held accountable. The United States continues to support a credible, independent investigation to further determine all facts on the ground to aid in these processes of accountability. We have supported constructive action on the Rakhine crisis at the UN Security Council and in the UN General Assembly’s Third Committee. The United States will also pursue accountability through U.S. law, including possible targeted sanctions.

We support the Burmese government’s commitment to create the conditions necessary for all refugees and internally displaced people to return to their homes safely and voluntarily, and welcome recent exchanges between the governments of Burma and Bangladesh on repatriation. Support by Burma’s military for these government efforts is crucial. This is a difficult and complex situation. Many stakeholders must work together to ensure progress.