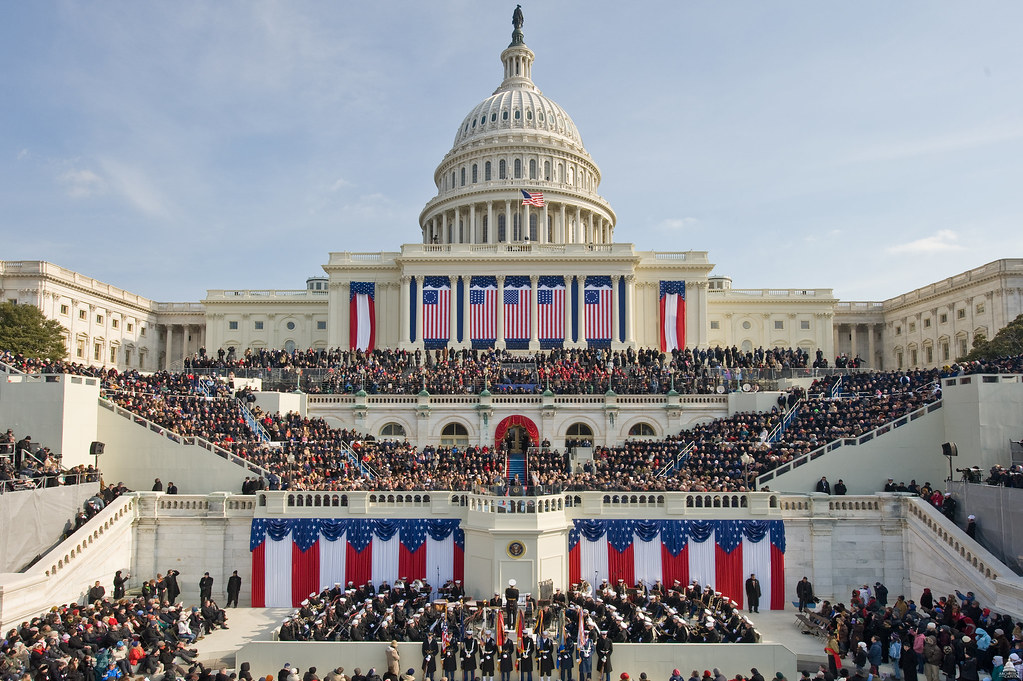 Governmental power and functions in the United States rest in three branches of government: the legislative, judicial, and executive. Article 1 of the Constitution defines the legislative branch and vests power to legislate in the Congress of the United States. The executive powers of the President are defined in Article 2. Article 3 places judicial power in the hands of one Supreme Court and inferior courts as Congress sees necessary to establish. In this system of a “separation of powers” each branch operates independently of the others, however, there are built in “checks and balances” to prevent a concentration of power in any one branch and to protect the rights and liberties of citizens. For example, the President can veto bills approved by Congress and the President nominates individuals to serve in the Federal judiciary; the Supreme Court can declare a law enacted by Congress or an action by the President unconstitutional; and Congress can impeach the President and Federal court justices and judges.

The American Constitution is the oldest written constitution in force in the world. The authors of the Constitution built in a provision for amending the document when political, social or economic conditions demanded it.

Twenty-seven amendments have been passed since ratification. The first 10 amendments to the Constitution, called the Bill of Rights, assure individual rights and freedoms.

The Constitution divides the powers of the government into three branches – the Executive, headed by the President; the Legislative, which includes both houses of Congress (the Senate and the House of Representatives); and the Judicial, which is headed by the Supreme Court. The Constitution limits the role of each branch, through a system of checks and balances, to prevent any one branch from gaining undue power.

The chief executive of the United States is the president, who together with the vice-president is elected to a four year term. As a result of a 1951 constitutional amendment, a president may be elected to only two terms.

The president’s powers are formidable but not unlimited. As the chief formulator of national policy, the president proposes legislation to Congress and may veto any bill passed by Congress. The president is commander-in-chief of the armed forces.

The executive branch of the Government is responsible for enforcing the laws of the land. The Vice President, department heads (Cabinet members), and heads of independent agencies assist in this capacity. Unlike the powers of the President, their responsibilities are not defined in the Constitution but each has special powers and functions.

As the 45th President of the United States, Donald Trump will preside over the executive branch, which includes 14 executive departments, the Executive Office of the President and numerous other independent agencies.

The day-to-day enforcement and administration of federal law is in the hands of the various executive departments, created by Congress to deal with specific areas of national and international affairs.

The heads of the departments, chosen by the President and approved by the Senate, form a council of advisers known as the President’s Cabinet.

The judicial branch is headed by the U.S. Supreme Court, which is the only court specifically created by the Constitution. In addition, Congress has established 13 federal courts of appeals and 95 federal district courts. The president has the authority to appoint federal judges as vacancies occur, including justices of the Supreme Court. The Supreme Court meets in Washington, D.C., and the other federal courts are located in cities throughout the United States.

The federal courts hear cases arising out of the Constitution, federal laws and treaties and maritime cases; cases involving foreign citizens or governments; and cases, in which the federal government is itself a party. With minor exceptions, cases come to the Supreme Court on appeal from lower courts. Most of these cases involve disputes over the interpretation and constitutionality of actions taken by the executive branch and of laws passed by Congress or the states.

The legislative branch – the Congress – is made up of elected representatives from each of the 50 states. The Constitution sets up a bi-cameral body known as the U.S. Congress to raise and to spend national revenue and to draft laws. It is commonly said that Congress influences American policy by exercising the “power of the purse strings.” It is the only branch of U.S. government that can make federal laws, declare war and put foreign treaties into effect.

Members of the House of Representatives are elected to two year terms. Each member represents a district in his or her home state. The number of districts is determined by the census, which is conducted every 10 years. Senators are elected to six year terms, staggered so that one third of the Senate stands for election every two years. The Constitution provides that the vice-president shall be president of the Senate. He or she has no vote, except in the case of a tie.

To become a law, a bill must pass both the House and the Senate. After the bill is introduced in either body, it is studied by one or more committees, amended, voted out of committee, and discussed in the chamber of the House or Senate. If passed by one body, it goes to the other for consideration. Once both bodies have passed the the same version of a bill, it goes to the president for approval.

The state governments follow the same pattern as the federal government, with power divided among the executive, legislative and judicial branches. In general, matters which lie entirely within state borders are the concern of state governments. These include internal communications; regulations relating to property, industry, business and public utilities; the state criminal code; and working conditions within the state.

Within this context, the federal government requires that state governments not adopt laws which contradict or violate the Constitution or laws and treaties of the United States. There are many areas of overlap between state and federal jurisdictions. The federal government has assumed ever broadening responsibility in matters relating to health, education, welfare, transportation, and housing and urban development. Programs in these areas are now often developed on a cooperative basis between the two levels of government.

The U.S. Bureau of the Census (part of the Commerce Department) has identified no less than 78,218 local governmental units in the United States, including municipalities, counties, townships, school districts and special districts.

More than three-quarters of the citizens of the United States now live in towns, large cities or their suburbs. The city directly serves the needs of the people, providing everything from police and fire protection to sanitary codes, health regulations, education, public transportation and housing. Cooperation with both state and federal organizations is essential.

The county is a subdivision of the state, usually — but not always — containing two or more townships and several villages. A board of commissioners levies taxes, borrows and appropriates money, fixes the salaries of county employees, supervises elections, builds and maintains highways and bridges, and administers national, state and county welfare programs.