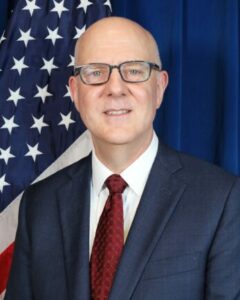 David Meale assumed the position of Deputy Chief of Mission on March 26, 2022, having served as Chargé d’Affaires at the U.S. Embassy in Beijing from July 2021. Prior to his arrival in Beijing, he was the Deputy Assistant Secretary for Trade Policy and Negotiations for the Economic Bureau at the U.S Department of State. He was previously the Director for Sanctions Policy and Implementation. Mr. Meale’s prior positions have included: Associate Dean for the Leadership and Management School at the Foreign Service Institute in Washington, DC; Deputy Chief of Mission at the U.S. Embassy in Dhaka, Bangladesh; Counselor for Economic Affairs at the U.S. Embassy in Kyiv, Ukraine; Deputy Director of the Office of Monetary Affairs in the Economic Bureau; and additional positions in China, Hong Kong, Taiwan, Guinea, and Washington. He joined the Foreign Service in 1992 and holds the rank of Minister-Counselor.

Prior to his Foreign Service Career, Mr. Meale held positions in corporate finance with Sprint Telecommunications. He has an MS from the National Defense University’s Eisenhower School, an MBA from Tulane University, and a BA from the University of Delaware. He has studied Mandarin Chinese, Ukrainian, and French at the Foreign Service Institute. Mr. Meale is married to Lisa O’Donnell, a teacher, and has two boys, Theo and Bennett, who are both in college.