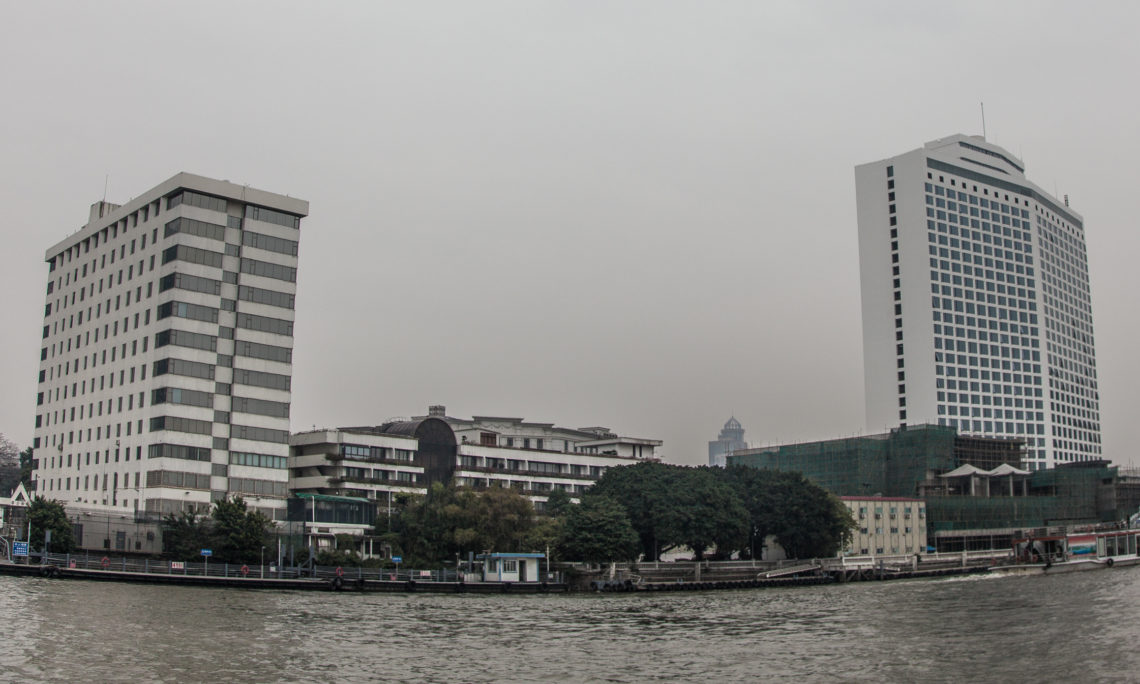 Throughout the past two centuries, dating back to the presidency of George Washington, Consulate Guangzhou (Canton), as America’s oldest diplomatic post in China and one of America’s oldest posts in the Far East, has played a pivotal role in promoting America’s relationship with China.  Today, the Consulate promotes trade and commercial ties, engages China across-the board on key American policy objectives, and promotes public diplomacy through visitor exchanges.  The Consulate General is the only U.S. mission in China to process American adoptions and immigrant visas, making it one of the U.S. Department of State’s busiest consular-related posts.

United States diplomatic presence in the Guangzhou area dates back to the founding years of the American republic.  In 1784, the American merchant ship Empress of China reached what was then known as the port of Canton transporting ginseng to trade for Chinese black tea.  The ship also carried on it Major Samuel Shaw, a 29-year old former Revolutionary War artillery officer, who served as the business agent for this first American trade effort to the “Middle Kingdom.”  Shaw wrote to Secretary of Foreign Affairs John Jay, recommending that the young United States appoint a consul and vice consul to Canton.  “Such officers,” he noted, “would have a degree of weight and respect which private adventurers cannot readily acquire, and which would enable them to render essential services to their countrymen.”  Major Shaw was appointed the first American consul to China, although he would serve “with neither salary nor perquisites but with the confidence and esteem of the United States.”

At that time, Chinese authorities limited trade with the outside world to the port of Canton.  All foreign traders were further restricted to living and working on factory compounds established on the banks of the Pearl River.  American trade with China increased steadily throughout the early decades of the nineteenth century, although there were long periods during which the office of the U.S. Consul at Canton was unoccupied, and Americans serving at the consulate typically did not speak Chinese.  In the wake of the Opium War between China and Great Britain, however, the Chinese government was compelled to expand trading opportunities beyond Canton.  After the conclusion of the hostilities, the first U.S. formal mission to China, led by former Congressman Caleb Cushing, brokered the 1844 Treaty of Wangxia, an agreement which secured trading privileges for American merchants and opened new Chinese ports to American vessels.  In addition to protecting the interests of United States merchants, American consuls enjoyed greater authority granted by Congress; in 1848 the Consulate was allowed to arraign U.S. citizens charged with offenses against the laws of China.  The Canton consulate was burned down in 1856, but U.S. diplomats continued to support an expanding American presence in the region throughout the nineteenth century.

Years Of Turmoil and Change

Aside from Guangzhou, U.S. Consulates were present in South China in the other opened ports of Fuzhou and Xiamen.  However, due to a parsimonious and semi-isolationist U.S. Congress, these consulates frequently remained unoccupied. In fact, British and German officials were often asked to represent U.S. interests. This continued until the mid-1880s when the Shanghai Consul General began administering all consular services in China. At other times, the U.S. Consulate in Guangzhou also shared this responsibility.

With the concurrence of the British government, the U.S., in 1873, built a consulate on Shamian Island, a sandy one kilometer long strip of land around which a man-made canal had been dug ten years before to separate it from the rest of the city.  Along with their European counterparts, foreign diplomatic personnel tried to recreate a Western lifestyle.  They built Anglican and Catholic churches, tennis courts, an indoor swimming pool, and long promenades. Today, visitors to Shamian Island can still see the vestiges of late eighteenth century and nineteenth century Western life.

While life on Shamian was peaceful and stable, life off of the island for the Chinese was not. Increasing dissatisfaction with the Qing Dynasty led to protests and its eventual overthrow. The Second Sino-Japanese War precipitated the withdrawal of consulate personnel in Fuzhou in 1934 and Canton in 1938.  Subsequent to Japan’s surrender to the Allies, many U.S. Consulates in China reopened.  For several months in 1949, after the Chinese Nationalist government moved its headquarters from Nanjing to Guangzhou, Shamian Island served as the site of the State Department’s “Office of Embassy.”  As the civil war raged between Chinese Nationalist and Communist forces, the Nationalist government decided once again to move the seat of government to Chungking (Chongqing) and the Office of Embassy followed.  Consulate Canton itself was closed in August, 1949, and diplomatic relations between the communist government of mainland China and the United States ceased shortly thereafter.

In the wake of the landmark visits of Secretary of State Henry Kissinger and President Richard Nixon, the United States and China formally re-established diplomatic relations on January 1, 1979.  According to an agreement, each country was allowed to set up two consulates.  The United States chose Shanghai and Guangzhou (China chose San Francisco and Houston).  On August 31, 1979, almost 30 years to the day that Consulate Canton had been closed, Vice-President Walter Mondale unveiled the seal for the new U.S. Consulate Guangzhou on the 11th floor of the Dongfang Hotel at 120 Liu Hua Road.  Richard L. Williams was appointed the first Consul General in China since 1949.  There have been 11 Consul Generals since then.  In April 1990, the Consulate returned to Shamian Island when the current Consulate Tower, built on reclaimed land near the Pearl River, was completed at 1 Shamian South Street, next to the White Swan Hotel.

It did not take long to outgrow the Consulate building on Shamian Island and in July 2013, a new state-of-the-art building was opened in Zhujiang New Town. The buildings and compound were designed to maximize the connection with Chinese culture specifically that of China’s southern coastal Lin’an culture in which trees, riparian plant materials, and public spaces are seamlessly woven together.  The Department of State emphasized energy efficiency and sustainability when designing the new Consulate. It was constructed with materials known to have low life-cycle costs and high quality.  The use of extensive natural light keeps energy costs down while providing efficient work areas for employees.  Daylight is provided without heat gain through the use of recessed exterior glazing and wooden louvers.  Storm water is retained on site and filtered through a series of “bio basins” or sunken gardens filled with indigenous grasses and plantings.  In addition, “Green” roofs with growing plants and white, sunlight-reflecting roofs, along with state-of-the-art mechanical systems demonstrate the United States commitment to the environment.

China, and particularly the Pearl River Delta (or PRD, the region surrounding the Pearl River from Shenzhen to Zhuhai) has been extraordinary.  Since 1980, the GDP of the Pearl River Delta region has grown annually at 16 percent and about 1/3 of all of China’s global exports originate from this area of 35 million people.  Today the Consulate’s economic and political officers report on the developments of the Consulate district (Guangdong, Guangxi, Fujian and Hainan provinces), comprising more than 200 million Chinese people and 33,000 U.S. citizens.

As South China has historically been the home for most Chinese immigrants to America, Guangzhou was designated as the sole immigrant visa processing post for all of China in the early 1980s.  Additionally, in 1992 all adoption processing was assigned to Guangzhou. To date, Americans have adopted more than 90,000 children from China. Immigrant and non-immigrant visa numbers have also risen in the past 30 years. Whereas in 1979 the Consulate processed about 27,000 visa applicants (both nonimmigrant and immigrant visas), today it adjudicates annually over 1 million applications.

The city of Guangzhou today barely resembles old Canton of generations past.  While many ancient pagodas and historical sites remain, modern high rises and expressways dominate this still-vital commercial port and provincial capital.  The current nature and character of America’s diplomatic presence is also in dramatic contrast to earlier efforts.  The U.S. Consulate continues to strive to more effectively meet the needs of American citizens and U.S. companies, as well as promote the diplomatic goals of the United States government.  Much as Guangzhou has acted as the world’s window into its most populous country, so the Consulate will continue to serve as America’s link to South China.