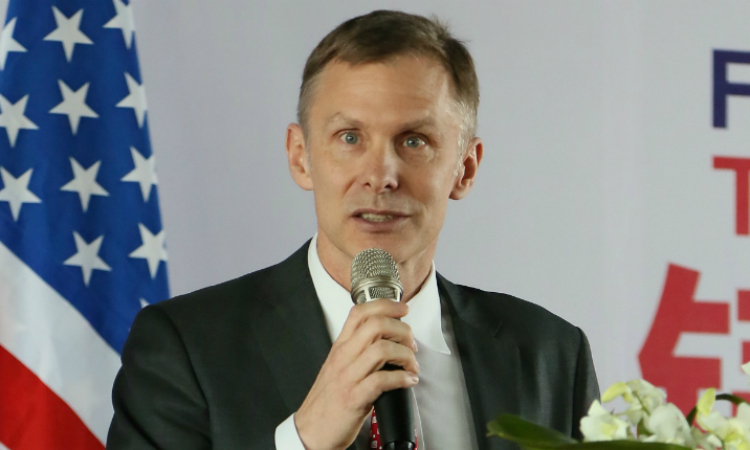 Thanks, Joe.  Good morning everyone!

I am honored to be here for the groundbreaking ceremony of our new Consulate General Office here in Wuhan.

It’s a pleasure to see Mayor Shao and all of our distinguished guests here today.

When I first came to Wuhan in 2008, I was told Wuhan was called the “Chicago of Asia.”  Being from Chicago myself, I’ve always felt very at home here, and it’s great to be back.

For me, today is particularly meaningful because I led the efforts to reopen our consulate here in 2008.

At the time, I was a Political Officer assigned to our embassy in Beijing and made many trips to Wuhan.  I worked with city and provincial officials, negotiating the many details involved with starting a new consulate.

I am extremely proud to have supported opening up this new consulate and that is why Wuhan will always be special to me.

And so today’s ceremony marks an important step not only for our Consulate General here in Wuhan, but for the entire China Mission.

The U.S.-China relationship is the most consequential in the world.  And our consulate here allows us to expand and deepen that relationship – as it has been doing since 2008, through building connections between our two countries and people.

There are many other links including the strong business ties between San Francisco’s Silicon Valley and Wuhan’s Optics Valley.  There’s even a non-stop flight now connecting Wuhan with San Francisco.

On the scientific front, U.S. and Wuhan researchers are working together on clean coal technologies to reduce carbon emissions as part of the U.S.-China Clean Energy Research Center (CERC).

I came back to Beijing for another tour in China last January and visited Wuhan shortly after that.

I was amazed at the rapid development of the metro system here, which only had one line in 2008, and was pleased to learn that the U.S. based Motorola Solutions is providing signal systems to the Wuhan metro system.

It has also been wonderful to watch just how much Consulate Wuhan has grown over the past year alone — from two diplomats to the current seven.  And it’s great to see all the work and planning that has gone into making today a reality.

Today, we celebrate “Building for the Future” as we take the next step towards further expanding the U.S. Consulate General in Wuhan.

We symbolically “break ground” to signal the start of construction on our new office here in the Minsheng Bank Building.

When completed next summer, the Wuhan Consulate will be able to offer the same consular services as the embassy in Beijing and our four other consulates in Shenyang, Shanghai, Guangzhou and Chengdu.

The Wuhan consular section will provide full consular services, including non-immigrant visa services to the 300 million potential travelers from central China to the United States.

Likewise, American citizens will be able to enjoy the full range of services like passports and Reports of Birth Abroad.

In 2015, Mission China consular sections processed about 2.4 million non-immigrant visa applications. With the 10 year reciprocal visa agreement our countries launched in 2014, it is more convenient than ever before to obtain a U.S. visa.  The consulate in Wuhan will make it even easier for the people of central China to travel to the United States.

I really appreciate our Consul General Joe Zadrozny and his staff who have been working tirelessly to get the new office project to where we are today.  You should be very proud of all the work you’ve done.

As we “Build for the Future,” I’m confident that our new consulate will continue its great work to expand connections between Wuhan and central China and the people of the United States.