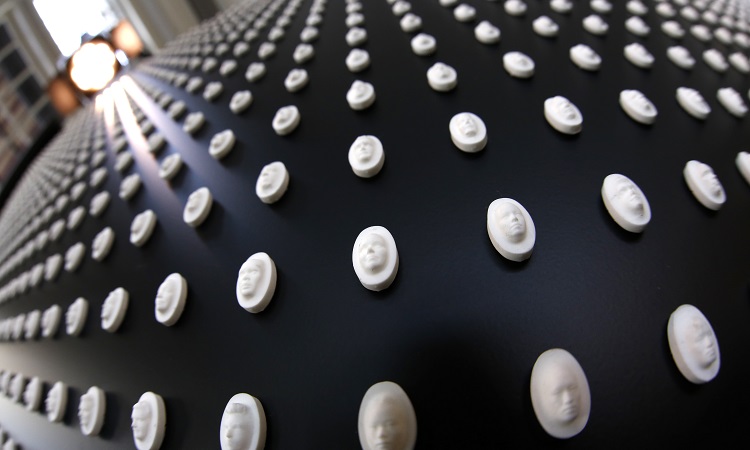 This image made with a fisheye lens, shows a portion of the 22,000 pills with faces carved into them on display in a memorial by the National Safety Council to the victims of the opioid epidemic at the University of Pittsburgh.

June 26 marks the International Day Against Drug Abuse and Trafficking, or World Drug Day. This global event, established by the United Nations in 1987, strengthens cooperation and spurs action towards the ambitious goal of a world free of illicit drug use.

The consequences of drug use are felt by millions of people in the United States and around the world; some of the most dramatic effects are due to the crisis of opioid overdose. This epidemic, in its current, deadly manifestation is fueled in large part by potent synthetic opioids. In the early 2010’s, high demand for opioid drugs and a reduction in the available supply of prescription opioids prompted a shift in use patterns from prescription opioids to heroin, which was cheaper and often easier to acquire. The recent shift to more powerful synthetic opioids was similarly driven by growing demand for cheaper and stronger substances. The pattern is clear; we must address the problem of demand as part of the solution.

Due to the physical dependency and relapsing nature of addiction, drug traffickers rely on and exploit people with substance use disorders to generate profits and expand their markets. Therefore, prevention of drug use and treatment of substance use disorder are necessary components of an effective counternarcotics strategy. Access to effective treatment remains a major problem around the world. According to a study published in World Psychiatry in October 2017, only 34 percent of people diagnosed with substance use disorders around the world recognized a need for treatment, only 24 percent made at least one visit to a treatment service, and only seven percent received minimally adequate treatment (World Psychiatry 2017; 16:299-307).

In order to expand the number of people who receive quality treatment, the State Department bureau in which I work, International Narcotics and Law Enforcement Affairs (INL), supports training educators, treatment practitioners, and policymakers around the world in evidence-based methodologies for prevention and treatment of substance use. Specifically, INL disseminates the Universal Treatment Curriculum, a series of 23 courses offering research-based best practices in drug treatment. Additionally, INL supported the development of International Standards for the Treatment of Drug Use Disorders, which outline principles and standards of effective treatment practices and provide guidance for treatment centers on how to align their practices with the Standards. To share best practices in drug treatment, INL hosts groups of experts from around the world, including from China and Vietnam last month, and works closely with treatment centers, drug courts, and local community organizers to highlight drug treatment services in the United States.

Helping countries around the globe build their treatment capacity is an important part of reducing the global demand for drugs, but it is only one component of effective drug demand reduction. Prevention of substance use disorder before it develops is critical, and it relates to the theme of this year’s World Drug Day: “Listen First – Listening to children and youth is the first step to help them grow healthy and safe.” Childhood is a critical period of development. The earlier children start experimenting with drugs, the more likely they are to develop drug dependence. By promoting healthy lifestyle choices in childhood, we can reduce the prevalence of drug dependence in adults. INL promotes the dissemination of evidence-based prevention practices through the Universal Prevention Curriculum, which emphasizes proven prevention strategies in a variety of settings, from schools to the media.

Worldwide, the shape of the opioid crisis has changed dramatically in the past few years. The rapid proliferation of highly potent new synthetic drugs has made it profitable for criminals to send small shipments of dangerous substances to internet buyers all around the world. These substances are often added to street drugs or pressed into counterfeit pills to boost their psychoactive effects and increase the profit margins for street dealers. In 2013, emergency rooms and police forensic labs in the northeast United States began to report the presence of the synthetic opioid fentanyl in overdose cases and street drugs. In the three following years, fentanyl and other synthetic opioids were involved in over 34,000 overdose deaths in the United States, including over 19,000 in 2016 alone. While the drugs being abused in this epidemic may have changed, the one constant has been demand. Today, in June 2018, the addiction that fuels that demand drives people to consume stronger drugs despite the risks to their health and their lives. Reducing this demand through effective treatment and prevention is the key to any sustainable solution to this crisis.

About the Author: Dr. Andrew Thompson is a Science and Technology Policy Fellow of the American Association for the Advancement of Science (AAAS), serving as a Foreign Affairs Officer in the Office of Policy, Planning, and Coordination in the Bureau of International Narcotics and Law Enforcement Affairs at the U.S. Department of State.

Editor’s Note: This entry also appears in the U.S. Department of State’s publication on Medium.com.