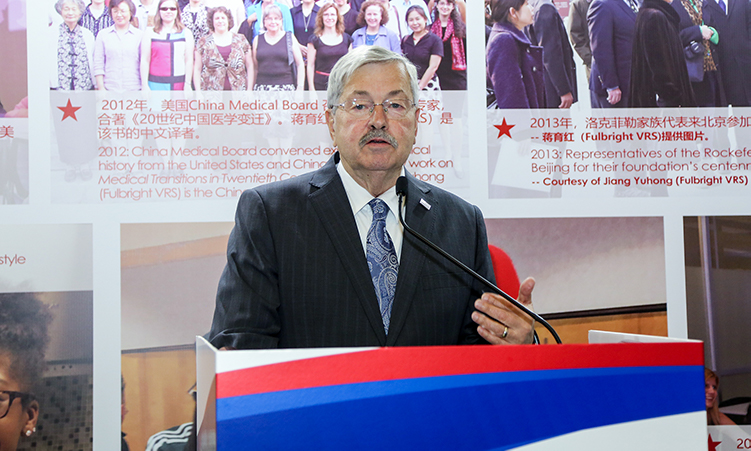 Over 35 years ago in 1983, as the governor of Iowa, I signed a sister state agreement with Hebei Province. I came to China in 1984 and the following year I hosted an agriculture delegation from Hebei province that included a young man by the name of Xi Jinping. Of course, I had no idea he would one day become President of China. But because of that visit, we were able to establish a friendship that lasts to this day. And the positive relationship that I have with President Xi certainly helps in my role as U.S. Ambassador to China.

We have a lot of exchange alumni here tonight. I am confident that each of your exchanges has helped build this bilateral relationship. The images in this exhibit were submitted by alumni of our people-to-people exchange programs from across China. The pictures and messages express what these exchanges have meant to them, and how they have helped build bridges between the United States and China. Building bridges between our countries makes a more peaceful and prosperous world . Because, as I’ve said many times, the U.S.-China relationship is the most consequential bilateral relationship in the world. And this is a significant year for U.S.-China relations.

This year marks not only 40 years since the United States and People’s Republic of China established diplomatic relations, it also marks 40 years of reform and opening for China. The strides China has made in the last 40 years are remarkable, and the United States has been there every step of the way. From supporting China’s entry into the World Trade Organization, to welcoming hundreds of thousands of Chinese students to study in the United States, we have advanced China’s economic growth and security. When people claim the United States seeks to block China’s rise, I think it’s important to remember the many ways in which the United States has in fact contributed to China’s development. We in the United States have opened our markets and our institutions of research and higher learning. We have engaged through high-level government dialogue. We have engaged through direct people-to-people exchanges.  This engagement has driven cooperation on the critical issues that our relationship spans, from promoting innovation to stemming global health pandemics, and so much more. Let me assure you that the United States continues to welcome engagement with the Chinese people. We welcome you to our campuses and institutions of learning.

Tonight, we pay tribute to our exchange program alumni. Each one of you has been a vital part of that engagement. Our Deputy Assistant Secretary for Academic Programs, Caroline Casagrande, is here all the way from Washington in recognition of your contributions and achievements. And our alumni hail from across China, from Harbin to Guangzhou, from Urumqi to Tianjin, and everywhere in between! Once again, thank you for being the bedrock of the U.S.-China relationship, and for all you do to make your communities and the world a better place.

Thank you, xie xie, and enjoy the exhibit!