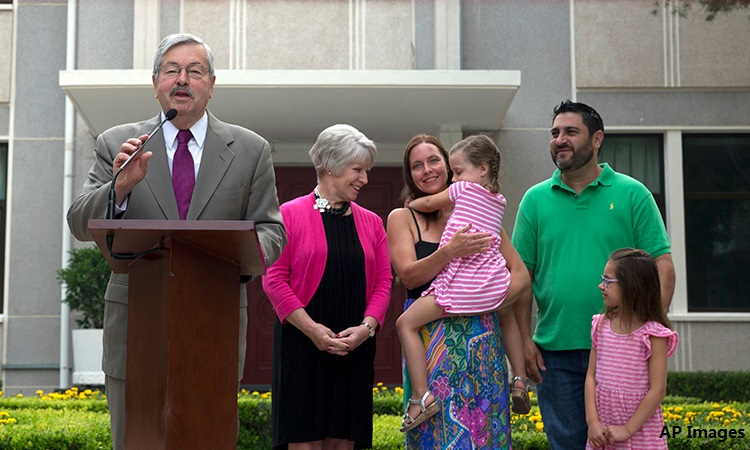 US Ambassador to the Peoples’ Republic of China Terry Branstad and his family have arrived in China and met with the press at his official residence Wednesday, June 28.   His wife Christine, daughter Alison and her husband Jerry Costa, and granddaughters have joined him in Beijing.

During the media event he said: “We recognize this is an important relationship between the two greatest economic powers in the world, the United States and the People’s Republic of China. We need to work together to deal with some of the pressing difficult issues, such as the threat from North Korea. We want to work together to denuclearize the Korean Peninsula. We also want to work together on issues like expanding trade that will continue to increase economic opportunities for the people of China, as well as to increase jobs and economic opportunities for the people of the United States of America.”

Ambassador Branstad was also warmly greeted by the Embassy team on Tuesday and said: “I am excited to be here… I want to say how honored and proud I am to be selected by President Trump to represent the United States of America here in the Peoples’ Republic of China…You all know that this relationship is the most important bilateral relationship in the world.  And I want to do everything that I can to try to increase the collaboration and cooperation between our two countries, to address some of the big challenges like the threat from North Korea and also to improve economic opportunities in both of our countries and to reduce the trade deficit…I want to go to every province and really meet the people of this great country, and let them know that we are their friends, and we want to work with the people of China for a better world.”