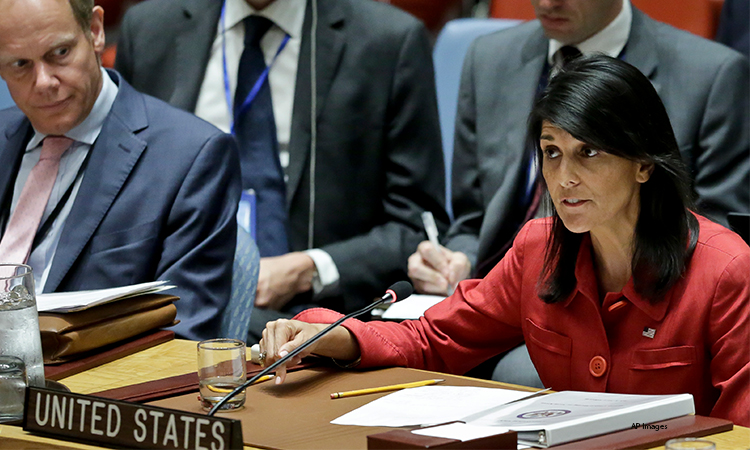 To my friends on the Security Council, I must say that today is a dark day. It is a dark day because yesterday’s actions by North Korea made the world a more dangerous place. Their illegal missile launch was not only dangerous, but reckless and irresponsible. It showed that North Korea does not want to be part of a peaceful world. They have cast a dark shadow of conflict on all nations that strive for peace.

Yesterday’s act came from the same vicious dictator who sent a young college student back home to his parents, unresponsive and in a coma. For Americans, the true nature of the North Korean regime was painfully brought home with the images of two guards holding Otto Warmbier up as they transported him from a prison he should never have been in. Otto Warmbier is but one person out of millions who have been killed, tortured, or deprived of their human rights by the North Korean regime.

To Americans, the death of one innocent person can be as powerful as the death of millions. Because all men and women are created in God’s image, depravity toward one is a sure sign of willingness to do much more harm.

The nature of the North Korean regime is clear; only the scale of the damage it does could become different. That’s why yesterday’s escalation is so alarming. If North Korea will treat an innocent young student the way it treated Otto Warmbier, we should not be surprised if it acts barbarically on a larger scale.

The United States does not seek conflict. In fact, we seek to avoid it. We seek only the peaceful denuclearization of the Korean peninsula and an end to the threatening actions by North Korea. Regrettably, we’re witnessing just the opposite. Make no mistake, North Korea’s launch of an ICBM is a clear and sharp military escalation. The North Korean regime openly states that its missiles are intended to deliver nuclear weapons to strike cities in the United States, South Korea, and Japan. And now it has a greater capacity to do so.

In truth, it is not only the United States and our allies that are threatened. North Korea’s destabilizing escalation is a threat to all nations in the region and beyond. Their actions are quickly closing off the possibility of a diplomatic solution.

The United States is prepared to use the full range of our capabilities to defend ourselves and our allies. One of our capabilities lies with our considerable military forces. We will use them if we must, but we prefer not to have to go in that direction. We have other methods of addressing those who threaten us and of addressing those who supply the threats. We have great capabilities in the area of trade. President Trump has spoken repeatedly about this. I spoke with him at length about it this morning.

There are countries that are allowing – even encouraging – trade with North Korea in violation of UN Security Council resolutions. Such countries would also like to continue their trade arrangements with the United States. That’s not going to happen. Our attitude on trade changes when countries do not take international security threats seriously. Before the path to a peaceful solution is entirely closed, however, there remains more that the international community can and must do diplomatically and economically.

In the coming days, we will bring before the Security Council a resolution that raises the international response in a way that is proportionate to North Korea’s new escalation. I will not detail that resolution here today, but the options are all known to us. If we are unified, the international community can cut off the major sources of hard currency to the North Korean regime. We can restrict the flow of oil to their military and their weapons programs. We can increase air and maritime restrictions. We can hold senior regime officials accountable.

The international community has spoken frequently against the illegal and dangerous actions of the North Korean regime. For many years, there have been numerous UN sanctions against North Korea. But they have been insufficient to get them to change their destructive course. So in order to have an impact – in order to move North Korea off its military escalation – we must do more. We will not look exclusively at North Korea. We will look at any country that chooses to do business with this outlaw regime. We will not have patience for stalling or talking our way down to a watered-down resolution.

Yesterday’s ICBM escalation requires an escalated diplomatic and economic response. Time is short. Action is required. The world is on notice. If we act together, we can still prevent a catastrophe, and we can rid the world of a grave threat. If we fail to act in a serious way, there will be a different response.