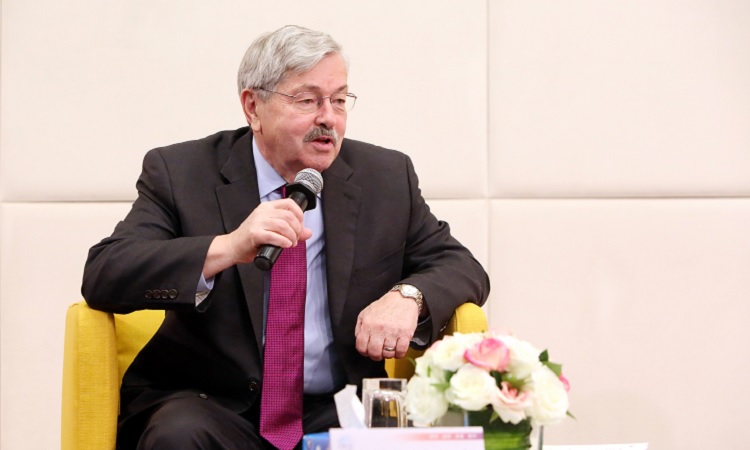 June 26 marks International Day Against Drug Abuse and Illicit Trafficking, one of the most pressing public health challenges facing the world today is drug use, production and trafficking. And next month will be the 233rd birthday of Commissioner Lin Zexu, who spearheaded Qing Dynasty’s campaign to suppress opium. Fortunately, this is also an area where the United States and China are cooperating to make the world safer, showing what can be done when our two countries come together to solve a global problem.

In the last several years the world has been inundated by a wave of new, highly potent synthetic drugs, including illicit synthetic opioids. The World Health Organization reported that 587 tons of opioids were seized worldwide in 2015. That’s enough to fill four shipping containers. The opioid epidemic costs the American economy an estimated $504 billion annually. Meanwhile, according to China’s National Narcotics Control Commission, drug seizures in 2017 were up more than 100 percent from 2016. Highly addictive, deadly new forms of synthetic opioid such as fentanyl and methamphetamines are driving the current epidemic.

The drug trade is not just a law enforcement or economic problem. It is also a public health problem. According to the United Nations Office on Drugs and Crime, 29.5 million people globally suffer from drug use disorders. Each year there are around 190,000 preventable premature deaths from drugs. In the United States alone there are over one hundred deaths each day. The primary culprit is opioids. China’s government estimates there are about two and a half million drug users in this country, an increase of about seven percent from a year ago. Moreover, drug abuse exacerbates other health risks, including the spread of HIV and hepatitis due to injection drug use. Stopping this epidemic requires not only fighting the illegal production and transport of drugs, but also treating drug abusers and preventing new addictions.

What are we doing about this？ During President Trump’s November 2017 visit to Beijing, the United States and China committed to cooperate on stemming the flow of deadly narcotics.

Each country has a role to play. For several years the United States has focused on targeting opioid trafficking while simultaneously engaging in public health campaigns to prevent and cure addiction. China has also been working on these issues. China’s government reported nearly 170,000 drug-related arrests for production or trafficking in 2016, and has been working to prevent new addictions among its citizens.

Beyond our national efforts, we can accomplish even more by working together—as the Chinese saying goes, “the more people that are fueling the fire, the higher the flame （众人拾柴火焰高）.” Indeed, since Presidents Trump and Xi agreed to work together last November, our collaboration has generated tangible results.

We have tightened cooperation between the U.S. Drug Enforcement Administration and the Narcotics Control Board of the Chinese Ministry of Public Security （MPS）. Just last month, MPS officials traveled to the United States for a first-of-its-kind visit to learn best practices for drug prevention and treatment. At stops in Washington D.C. and New York City, they saw the roles played by U.S. federal agencies, private treatment centers, and community NGOs in helping Americans combat substance abuse.

Here in China, the government has taken effective steps to control the production and spread of illicit synthetic opioids. In a welcome innovation, a new procedure for designating illicit drugs now allows China to consider harm to the public in countries other than China （regardless of the absence of an epidemic in China） when evaluating whether a substance should be deemed illicit.

These new rules are already having an effect. U.S. data confirm seizures of new forms of drugs have sharply declined since China recently amended their scheduling process. And in late 2017 a joint U.S.-China drug-interdiction action produced clues that led Chinese police to an illicit drug lab in central China. Shutting down the lab saved a Chinese neighborhood from possible contamination from dangerous chemicals, while keeping a deadly, addictive substance off the streets.

Cooperation on combatting the flow of illicit opioids is one of the true bright spots in the U.S.-China relationship. Nonetheless, the fight to roll back this epidemic is far from over.

We will continue to work with China to fight drug trafficking, while seeking to reduce the number of people who suffer from these addictions. We will continue sharing law enforcement information and best practices, and offer assistance as China further develops its efforts to combat domestic drug addiction, helping keep Chinese citizens from suffering the fate too many Americans have already suffered.

We appreciate our continued partnership and urge China to be a global leader in fighting drug abuse. Together we can achieve the goals of this international day： to create a world free of drug abuse and illicit trafficking.