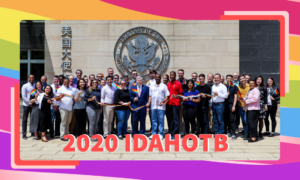 Today marks the International Day Against Homophobia, Transphobia, and Biphobia (IDAHOTB).  In 2004, IDAHOTB was founded in order to bring attention the discrimination and violence faced by members of lesbian, gay, bisexual, transgender and queer (LGBTI) community.  The date of May 17 was chosen to commemorate the World Health Organization’s decision in 1990 to declassify homosexuality as a mental disorder.  IDAHOTB is now celebrated in more than 130 countries through thousands of initiatives, big and small, including in 37 countries where same-sex acts are still illegal.

May 17 is equally a day to celebrate the extraordinary achievements and bravery of members of the LGBTI community who have continued to advocate and advance equality and justice under the belief that all people deserve to live free from fear, violence, and discrimination, regardless of who they are or whom they love.

We commemorate May 17 to support our LGBTI family members’, friends’, neighbors’, co-workers’, and fellow citizens’ ability to live openly and equally in dignity and rights.  It is also a day to examine the steps we can take to end discrimination toward persons on the basis of sex, sexual orientation, gender identity, and other categories.

I am encouraged that each year, a growing number of Chinese citizens are choosing a path of tolerance and inclusivity and that they support efforts to combat discrimination against the LGBTI community.  Like many citizens in the United States, they advocate for the rights of LGBTI individuals, and they are courageous in speaking out about the challenges of finding acceptance and fighting discrimination.

This is an important day and a fitting reminder that LGBTI rights are human rights, and we will continue to support members of the LGBTI community, human rights champions, and the sacrifices they have made at home and abroad, as they struggle for a more free, just, and inclusive world for all citizens.