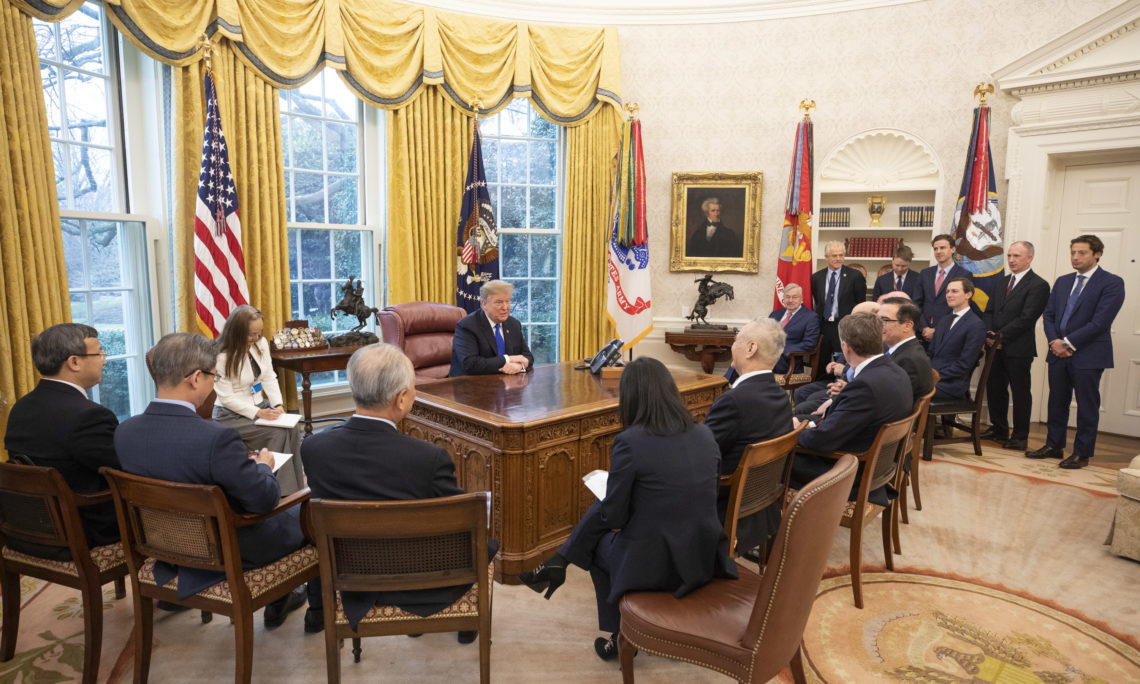 IN MEETING WITH VICE PREMIER LIU HE

OF THE PEOPLE’S REPUBLIC OF CHINA

We’re having very good talks.  There’s a chance that something very exciting could happen.  This is a deal that would be signed by me.  I’ve been in touch with Congress.  I’ve been telling many of the people in Congress exactly where we are.  We’re, right now, getting a 25 percent tariff on $50 billion worth of goods coming in — mostly technology and high technology.

But if we could make a deal, we wouldn’t have to bother with that discussion.  So we’ll see what happens.  But we’ve had very good talks.  As you know, Mr. Lighthizer has done a great job.  But it’s only a great job, Bob, if you get it finished, right?

PRESIDENT TRUMP:  And if it’s a deal that’s a good deal for both.

PRESIDENT TRUMP:  And, Steve, great.  But it’s only great if you get it done.

Wilbur, Sonny — Sonny doesn’t care; he just wants a lot of products being bought from the farmers.  Is that right, Sonny?  That’s what you care about.  Sonny is more interested in the farmers than he is any other aspect.

But Larry Kudlow, Mr. Ambassador — the longest-serving governor in the history of the country, as you know.  And now he’s ambassador to China.  But he was the Governor of Iowa for 24 years, right?

AMBASSADOR BRANSTAD:  Twenty- — well, I would have been, except you appointed me as ambassador.  (Laughter.)

PRESIDENT TRUMP:  Okay, but you were still the longest —

PRESIDENT TRUMP:  It’s the longest-serving governor in the history of our country.  I believe —

So when it came time to picking an ambassador from China, I say, “I think I have the right guy.  He happens to be governor of the great state of Iowa.”  And you have done a fantastic job.  But I thought that story was incredible.

So, many years ago, he said that he knows who the next President of China is going to be.  I thought — I just think it’s a great story.  And his wife confirms it fully, so that’s good.

So I just want to thank everybody for being here.  We’re going to have discussions right now.  We’re talking.  And again, I think we’re making a lot of progress.  I think there’s a very, very good chance that a deal could be made.  We’ll be meeting at some point with President Xi — assuming we go further along the line, Bob.  Could you say a couple of words to that as to the potential of a meeting — whether or not we will (inaudible)?

AMBASSADOR LIGHTHIZER:  We’ve made progress on some very important structural issues and some progress on purchases.  We have a few very, very big hurdles that we still have to face, but if we make — if we continue to make progress, that would be a great outcome, and I think the Vice Premier agrees with that.

SECRETARY MNUCHIN:  I would just add that the Vice Premier and his team have agreed to extend their trip for two days, so we will be meeting all day tomorrow and into Sunday so we can continue on a very important — this is — the ambassador has done a very good job at documenting multiple MOUs that will be binding and enforceable and cover all different types of industries.

If we can successfully conclude this, this will be very good for U.S. business and finally allowing China to open up to U.S. business.

PRESIDENT TRUMP:  Why do you bother putting it in a form of a letter of intent or whatever you want to call it?  To me, it’s a waste of time.

SECRETARY MNUCHIN:  Well, we want to make sure.  These are very important issues.  There’s hundreds of issues that we’re dealing with — everything from financial services to currency, to forced technology transfer, to aircraft, to express shipping, to different industries.  So these are very complicated issues that the ambassador —

PRESIDENT TRUMP:  Currency manipulation — a very important subject which a lot people didn’t even think in terms of.

SECRETARY MNUCHIN:  Yes.  And that’s one of the areas, Mr. President, we actually concluded and reached an agreement — one of the strongest agreements ever on currency.  But we have a lot of work to do over the next two days on many issues.

PRESIDENT TRUMP:  Have you discussed and reached a final agreement on currency?

AMBASSADOR LIGHTHIZER:  We have on currency, but we have a lot more work to do over the next two days.

SECRETARY ROSS:  I’m very encouraged by what’s going on.  I think that the tariff situation is an important one, that this could be a good substitute for it if we can fill in more of the blanks.  But there’s a lot more to be done, as everybody has said.  So it’s a little early for champagne.

PRESIDENT TRUMP:  No, I agree with that.

Secretary, go ahead.  For the farmers, (inaudible).

SECRETARY PERDUE:  I think the work that’s being done on both sides is very, very important.  And I’m happy to hear the progress, obviously.  I think everybody understands, Mr. President, this deal will be consummated — if there is a deal — by you and President Xi.  And we understand that.

Obviously, you have some great negotiators on your side, as does the Vice Premier, in that regard.  There are a lot of details to work through, but ultimately you and President Xi are going to have to really do the deal.

PRESIDENT TRUMP:  I think we’re doing very well with regard to farmers and the buying of products from our farmers at a certain point.  They’ve already made a big commitment to do that.  But this will be a very, very substantial farm deal.  This will be the biggest farm deal ever made, if you think about it.  I don’t think anything will be close, because it’s China.  So hopefully, if we arrive at a deal, they’ll be buying lots of every form of farm product.

Mr. Ambassador, would you say something, if you’d like?

AMBASSADOR BRANSTAD:  Well, I think this is probably a very historic time.  And these are the two biggest economies in the world.  And if these difficult structural issues can get worked out, I think it will be tremendously beneficial not only to China and the United States, but to the whole world economy.

So I know people have been working very hard.  We’ve had many, many sessions, both in Beijing and here.  And I appreciate the hard work and the diligence that’s going on.

One of the things that’s so important to me is the fentanyl.  And President Xi has agreed to criminalize the sale of fentanyl.  Right now, it’s not a criminal product because I guess they call it “industrial,” or they call it something.  But it’s not a criminal product.  And China has much tougher laws than we do in this country on drugs, so they don’t have a big drug problem in China.  They have a thing called the death penalty.

So I very much appreciate that.  And that’s another thing we’ll be finalizing, hopefully, at the meeting that we have.

So subject to where they are — and we’re going to have a meeting now — but subject to where they are, we will be having at least an additional meeting.  And then, ultimately, we’ll have a meeting with myself and President Xi to discuss the final terms and things that haven’t been agreed to.  But I think a lot of those things have been agreed to, but they want he and I to agree to them in a final form.  But the fentanyl is so important to us.  The criminalization of fentanyl is so important to us, and we appreciate that.

So what would that include?  That would be Sunday, Monday?  Or —

AMBASSADOR LIGHTHIZER:  It will be all day Saturday and all day Sunday.

PRESIDENT TRUMP:  All day Sunday.  So they’ll be leaving on Sunday night and Monday morning.

So, great progress being made.  Let’s see what happens.  Thank you all very much.  I appreciate it.

Q    Mr. President, do you expect to extend the deadline because of the progress here?  Or will you still stick with March 1st?

PRESIDENT TRUMP:  Well, I set the deadline of March 1st, and right now it’s at 10 percent.  And I think that if — I mean, you can tell this to President Xi — I think — and if I see progress being made, substantial progress being made, it would not be inappropriate to extend that deadline — keep it at 10 percent, instead of raising it to 25 percent.  And I would be inclined to doing that.  I haven’t even spoken to my people about it.  Most people assume it’ll just kick in automatically — the 25 percent.  But I’m the one that said it, and I think it was a reasonable period of time.

But we’re covering things that we didn’t even know we’d be covering.  We’re going very deep into the trade, and covering items that a lot of people wanted to cover and nobody thought we’d ever get to.  But we have a one-time shot at making a great deal for both countries.  And so we are going to give it.

So it depends on where we are.  If we’re doing well — Jeff, if we’re doing very well on the negotiation, I could see extending that.  And I don’t think it would have to be a long-term extension because I would imagine that if it took, Steve, another month or so or less —

SECRETARY MNUCHIN:  Yeah, I think our expectation is to conclude this quickly.  And if we get to the point, over the next few days, of making progress, recommending a meeting for you and President Xi in March.

PRESIDENT TRUMP:  Yeah.  So dependent on how they do over the next few days, I would certainly consider that.  Okay?

PRESIDENT TRUMP:  Do you want to talk about the transfers?  Tech —

Q    Does that still have to be part of the deal —

AMBASSADOR LIGHTHIZER:  The answer is, yes.  It’s one of the structural issues.  It has to be done properly.  I mean, we’ve made a lot of progress.  So whoever told you we weren’t just didn’t know what they’re talking about.

SECRETARY MNUCHIN:  We’re planning it with your schedule, Mr. President.

PRESIDENT TRUMP:  Okay, so there — we have two schedules.  And we’ll be planning that with the schedule.

Q    Where do things stand with Huawei and ZTE?  Would you still consider a ban of Chinese technology?

PRESIDENT TRUMP:  Well, ZTE paid a big fine of $1.2 billion, which nobody has ever even heard of before.  And we want everybody to compete.  And I guess it will be somewhat of a subject that we’re talking about here, Bob.  We’ll be talking about it.  We may or may not include that in this deal.

Q    Would you drop criminal charges?

PRESIDENT TRUMP:  The Huawei and ZTE.

Q    Would you drop criminal charges against Huawei as part of this deal?

Now, with that being said, China has the advantage of having many years of tremendous success at the expense of the United States, so they understand that.  And I never blamed China for that; I blamed our past leaders.  Our leaders have done a lousy job with trade.  Our country lost $800 billion last year with trade, generally.  Eight hundred billion dollars.

So the Vice Premier understands that.  So this same agreement should have been made 20 years ago, not now.  Because, for 20 years, the United States has been really taken advantage of.  And I’m not blaming China, but we should’ve done the same thing to them.  But we didn’t do that.  We had Presidents that didn’t do their job.  You want to know the truth?  We had Presidents that did not do their job.